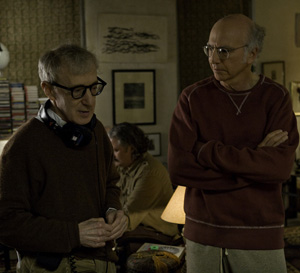 Woody Allen has returned to his roots, both geographic and creative, with Whatever Works. After a four-film dalliance in Europe, the director is back in his beloved hometown, his constant muse, New York City, for a picture that is classic Woody Allen. Or, perhaps, a more fitting description for his latest effort is: vintage.

Allen originally wrote the script in the 1970s as a vehicle for Zero Mostel, a Tony-winning actor best known for originating the roles of both Tevye in “Fiddler on the Roof” and Max Bialystock in “The Producers” on Broadway, but the film was shelved when Mostel passed away in 1977. It lay in a drawer until last year’s writers’ strike and potential actors’ strike threatened the film-a-year pace Allen has maintained since 1965. When he needed a project he could bring together quickly, Whatever Works was resurrected.

The film stars Larry David as a neurotic, curmudgeonly misanthrope who find himself entangled with a beautiful young Southern lass (Evan Rachel Wood) and her steel magnolia of a mother (Patricia Clarkson). Audiences have become so accustomed to watching Allen star in his own films that the few brave souls who step into his leading man shoes meet invariable comparisons. While some did uncanny impersonations, for example John Cusack (Bullets Over Broadway) and Edward Norton (Everyone Says I Love You), David was adamant about forging his own path.

After being cast, the “Curb Your Enthusiasm” star and creator recalls, “People would say, ‘Will you be doing [Allen]?’ and I’d think they were out of their minds. It never occurred to me to want to do him. And he doesn’t want me to do him,” he continues, deadpan. “He didn’t call me up and say, ‘I want you to do me.’ It wasn’t something I even thought about at all.”

The one thing the entire cast thought about constantly was how to please their director. Allen is notoriously short with his actors and long with his takes, a practice that requires the utmost preparation from his cast, who were frequently called upon to shoot scenes that were upwards of 10 pages long, something unheard of on most sets.

“Patty said to me one night, ‘Honey, I’ve done Blanche DuBois at the Kennedy Center, but nothing’s harder than this,’” David reveals, laughing.

“It’s hard!” Clarkson retorts with a faux whine. “You really have to know your character and know what you’re doing. We get lazy as actors in film. We walk in [with] our page of dialogue. We’re like, ‘Get me my coffee and slippers. Maybe a croissant. And maybe I’m ready to shoot.’ No! With Woody, you have to be ready.”

“You don’t want to be the one to screw up his movie,” David admits with reverence.

Reverting away from the more traditional cinematic technique he employed in Match Point and Vicky Cristina Barcelona, Whatever Works is drenched in Allen’s auteur style. Shot theatrically, more in line with Mighty Aphrodite or Annie Hall.

Clarkson explains, “He shoots you at the right distance, captures you in the right place. He makes you look good, and you don’t realize it in the midst of shooting. What’s beautiful about Woody is he shoots you in all your glory.”

Still, an Allen set comes with an inherent intimidation factor, his cast it quick to point out that he has great respect for actors, despite his ability to verbalize his approval.

“He said to me once, ‘It wasn’t horrible.’ That made my day,” David ventures.

“My favorite was, ‘That was a lot funnier than I thought it would be,’” Wood says, laughing.