Under the Influence of Giants: Back from Bitch City to Make You Groove 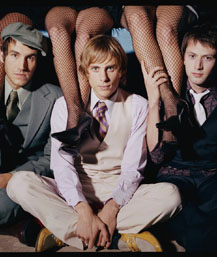 "They could expect to love them, I’ll tell you that," says singer Aaron Bruno when asked what people can expect from the songs Under the Influence of Giants have just completed recording. "It’s important to us that every song we write is possibly better than the last one we wrote. That’s what a lot of our favorite bands did too."

Musicians like The Beatles, The Who, The Bee Gees, Stevie Wonder, Led Zeppelin and Prince. Legendary artists that definitely fit the title of "Giants" referred to in this band’s moniker.

Judging from that eclectic list of influences, Giants are anything but your average band. Their first collection of songs, Bitch City, emerged last year garnering comparisons to all of the above with their fusion of rock, pop, jazz, disco, punk and funk.

"Each of those bands’ records got cooler and cooler, more different and bizarre, but [they] always had a sense of song and melody. That is really important to us as well," says Bruno.

Drummer Jamin Wilcox refers to their "equal passion for music" as being one thing that brought this tightly knit group together. Bruno and guitarist Drew Stewart grew up just north of L.A. and formed a couple of bands over the years before enlisting longtime friend Wilcox to join them, which created Giants’ songwriting core.

Their camaraderie extends to include bassist Joshua Moreau and keyboardist Katie Logan, and it’s clear that there’s nothing forced about this quintet when on stage. Their natural chemistry is accentuated by the mutual respect they share for one other.

"I look up to each of them," Bruno says. "It’s an honor to be onstage with them at the same time. I could look to my right, my left or behind me and get pumped up or inspired by what they’re doing. It makes me feel more confident because they look so dope! (laughs) And we’re all kind of coming from the same place musically, which is hard to do."

Over the past year, Giants have relentlessly played nearly every venue in the L.A. area.

"We did as many shows as we possibly could for free to jump in front of audiences so they got a chance to judge whether or not they wanted to become dedicated fans or not," Bruno remarks. A month-long residency at Club Moscow in January was key to the incredible growth Giants have seen in their fan base.

According to Wilcox, it’s not only the free shows, but also evoking an emotion that is essential to leaving a lasting impression.

"Sometimes you just walk away from a band and they don’t give you an emotion and you think, ‘This is nothing. I might as well have never even seen them.’" Bruno adds, "We want people to feel the same way as some of us felt at our first concerts that really impacted us a lot [and] made us want to be a part of music."

"They’re the only two producers that we ever met that were really into our crazy thoughts that may seem bizarre to other producers," says Bruno.

After listening to new tracks like the infectiously catchy "On My Own" and "Can’t Stand," it’s clear that Giants not only want you to sing along with them at shows, but also want you to leave your cares at the door, lose yourself in the music and dance until you’re drenched in sweat and out of breath.

"Our rock songs are even heavier, the soul shit is even more on that level. When we recorded Bitch City we were just finding our place – I love that record, don’t get me wrong – but I think that now we just know exactly what we’re doing."

Under the Influence of Giants will play on Wed., May 18 at The Roxy in West Hollywood. The Mama's Room EP will be available at all Giants' shows. For more information, visit www.undertheinfluenceofgiants.tv and www.myspace.com/thegiants.