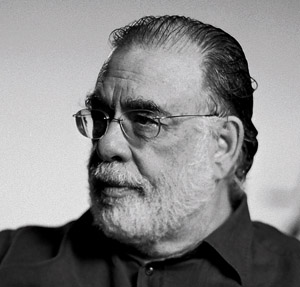 Francis Ford Coppola is very adamant about not having a movie career.

“I am for sure a has-been,” the five-time Academy Award winner and wine connoisseur says with a laugh. “But I ‘has been’ in something that was very exciting at the time. I don’t want that anymore. I don’t care if I don’t make money. I want to make films that I’m in love with.”

After a prolific, 40-year career – one studded with just as many downs as ups – Coppola is currently enduring a later-in-life crisis of sorts. But instead of taking daughter Sofia’s advice from Lost in Translation and buying a Porsche or drastically switching professional occupations like most adults do, Coppola chose to relearn the art form many believe he has already mastered.

“As I get older, learning is what I look for. Nothing makes you learn more than when you work on a personal film about something you’re interested in,” Coppola explains. “So in my second career, I’m learning how to make movies.”

Tetro, Coppola’s latest cinematic exploration and sophomore film in his so-called second career, marks the director’s return to the art house. Writing, directing, producing and even distributing the film, Coppola is finally delving into the personal works he had long wanted to make yet never could.

A contemporary Oedipal tale with shades of Biblical verses, Tetro weaves an intricate web of rivalry and betrayal within the closest knit institution of them all – family. Photographed in a moody black and white and set along the backdrop of darkly beautiful Buenos Aires, Tetro stars the electrifying Vincent Gallo and newcomer Alden Ehrenreich as estranged brothers, Tetro and Benny, respectively, who are born into a creative family ridden with untamed egos and jealousies. Though now miles away from their self-destructive relatives, the pain runs deep, and Tetro and Benny spend most of the film struggling to reconcile the past.

Tetro immediately draws vague comparisons to Coppola’s own life, specifically the widely known fact that he’s from a pseudo-royal family of artists and scholars. However, Coppola reiterates that even though he was inspired by his boisterous Italian family and their Italian Alzheimer’s (where one forgets everything but the grudge), Tetro is entirely fictional.

“You use your personal life, your memories and your feelings as source material for a fictional story,” Coppola says. “It’s like psychotherapy – you come away understanding everything a little bit better. By understanding, you can tend to put certain things to rest.”

This emphasis on the personal is a departure from 2007’s Youth Without Youth, which Coppola describes as more “cerebral and philosophical.” Panned by critics and garnering very little revenue in its limited release, it was thought the esteemed director had finally reached his peak and was now on a nosedive into celluloid obscurity.

“If you attempt anything a little more ambitious, you’re immediately condemned for being pretentious,” Coppola says. “But what is pretentious? Pretentious means you’re trying to do beyond what your ability can do. If you quit trying to do more than what your ability is, then you’re going to lose ever discovering – by luck – something that people can enjoy and younger filmmakers can make use of.”

Tetro, too, is far from perfect, teetering the line between just enough and overly self-indulgent at a lengthy two hours and 11 minutes – but what does Coppola care? Hollywood no longer his playing field, he bends to no other rules but the ones he creates himself.

Deeply textured, patiently told and layered with symbolism, allusions and motifs, watching Tetro is akin to reading a novel, requiring your full attention even at the film’s quietest moments. Yet it is this impeccable attention to, well, everything – the brilliant cinematography, affecting musical score and dynamic acting – that displays fine work from not only a master of the art form but also a bona fide cinephile.

“To me, cinema is like poetry with the way it uses images, words, acting, music – it’s just so powerful as a metaphor,” Coppola says. “It’s a young art form, and it’s greater potential is yet to be discovered.”

While he might be a self-defined “has-been” entering his twilight years, Coppola refuses to relinquish his potential to those Oscar statues crowding his shelves and simply fade away. There are more advancements in film with which to experiment, bringing with them an infinite amount of rules to break – something Coppola can finally do, as he no longer calls Hollywood home.

“It really feels that I have a clean sheet of paper,” Coppola says. “It’s a great privilege to know I can just sit down and write.”

Tetro is currently in select theaters.