The Greatest Seafaring Movies of All Time 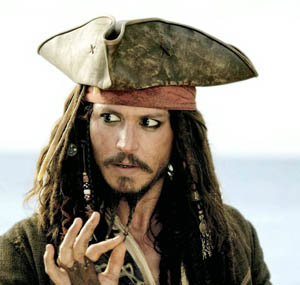 Johnny Depp in Pirates of the Caribbean
(Credit: Buena Vista)

Pretend for a moment that we are out on the fantail after the chief cook has turned out an especially good meal. Under fair skies, the crew shoots the breeze as the sun goes down. The talk turns from food to women to food and women and finally to movies.

What, ventures a wisenheimer, are the greatest seafaring movies of all time? No winner emerges, but there are plenty of candidates.

The Caine Mutiny from 1954, Humphrey Bogart’s last great film role as a Navy captain, obsessed with the theft of strawberries?

“I just saw Caine again the other day, and having lived through a sadistic captain or two myself, Bogie’s Captain Queeg has got to be right up there,” says Mike Rawlins, a former Merchant Marine officer and documentary filmmaker.

“I think my favorite scene is the one where Queeg runs over the towline while he’s berating one of the sailors out on the bridge wing,” says Rawlins, whose most recent film is Porampo: Pirates of the Malacca Straits.

How about Edward G. Robinson in The Sea Wolf from the great Jack London novel of the same name?

Perhaps a young ordinary mentions Pirates of the Caribbean – you can’t deny Johnny Depp’s Keith Richards impersonation in the starring role – and is laughed back to his fo’c’sle. Perhaps not.

A lot has changed at sea and in Hollywood since China Seas, a 1935 Taylor Garnett film in which Clark Gable navigates between Hong Kong and Singapore with a cargo of gold while charting the more treacherous waters of a love triangle with Jean Harlow and Rosalind Russell.

For the purposes of this discussion – and to acknowledge that, unlike westerns, there is not a treasure of sea movies to begin with – possibilities will extend to submarines, rivers and lakes, but draw the line at On Golden Pond.

The obvious titles are trotted out – John Huston’s Moby Dick, with Gregory Peck as Ahab; Captains Courageous from 1937 starring Lionel Barrymore and a young Spencer Tracy as a Portuguese fisherman. And then the engineers bring up The Sand Pebbles, the 1966 flick starring the coolest man in the world – dead or alive – Steve McQueen. Even deck officers give the film high marks.

“It has a good feel for engines and crappy duty up a Chinese river,” says Carl Nolte, a San Francisco Chronicle reporter who holds a captain’s license and is partial to The Caine Mutiny and Mister Roberts.

Based on the 1962 best-selling novel by Richard McKenna, The Sand Pebbles casts McQueen as Jake Holman, an American navy machinist on a 1920s gunboat in war-torn Shanghai. Holman’s life depends on the boat’s derelict, fickle steam engine.

Although the young Candice Bergen is afoot as a comely missionary, the more the moody McQueen becomes intimate with keeping the engine running, the more he seems to fall in love with it. (Thus an insight into so many jokes about engineers.)

There’s Mutiny on the Bounty, both the 1935 Charles Laughton version and the 1962 vehicle for Marlon Brando – what’s up with the weird accent, Marlon? – and a lot of affection for Two Years Before the Mast, the 1946 adaptation of the 19th century Richard Henry Dana book.

And then there is Das Boot – from Wolfgang Petersen, who also directed The Perfect Storm.

Boot, the 1981 German sub movie with a strong anti-war message, got high marks from everyone in this subjective discourse, applauded as equally as Russell Crowe’s Master and Commander was booed.

“I saw Das Boot for the first time after serving in the Navy, and it really visualizes what life on a sub is really like,” says John Zeidler. “Other sub movies are cute. Das Boot brings back the emotions of the ‘at sea’ life I experienced on the U.S.S. Lafayette.”

The first interracial kiss on the American screen took place in the 1958 seagoing adventure The Decks Ran Red, based on the book Infamy at Sea. The smooch was between Stuart Whitman, a murderous crew member, and Dorothy Dandridge, an African American sailing with her husband, Pete the Cook.

And a little known fact about Stanley Kubrick. One of Kubrick’s earliest films was The Seafarers, a 1953 propaganda vehicle for the Seafarers International Union. A union cafeteria scene, photographed in a long, sideways dolly shot in Brooklyn, N.Y., is shown in film school as quintessential Kubrick, calling to mind his mentor, Max Ophüls. And you thought Kubrick was just known for that other movie about space.

Rafael Alvarez is a short story writer. He can be reached at film@alvarezfiction.com.