An Injustice for Jim Kelly in Enter the Dragon 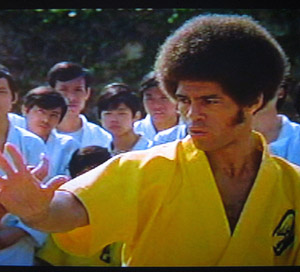 Jim Kelly in Enter the Dragon

I was out at a bar the other night, and a T-shirt that someone I was talking to had on caught my eye and sparked something in my mind that caused me to revisit a classic movie that was very dear to me growing up. The person had on a shirt with a picture of actor/martial artist Jim Kelly on it that instantly made me think of the classic film Enter the Dragon, starring Bruce Lee, John Saxon and, of course, Jim Kelly.

Enter the Dragon is the best film Bruce Lee made and one of the best martial arts films of all time. If you haven’t seen Enter the Dragon and you go around telling people you’re a movie buff, please e-mail me your address and a time when you’ll be home so I can call in an airstrike on your whole block just to make sure I don’t miss you.

Anyway, if you haven’t seen the movie you probably shouldn’t read on because I’m about to discuss something that would spoil a part of it for you. When I saw the shirt and I thought about the film, I remembered how much it sucked that Kelly’s character is killed. Brutally killed. I mean real bad. And to make matters worse, he’s killed in front of a group of chicks who are high on opium. Not very dignifying.

The reason it’s unfortunate is because Jim Kelly is as cool as cool can be. He’s cooler than Shaft and Super Fly put together. He’d be cooler than Bruce Lee if he weren’t, ya know … Bruce Lee.

What never occurred to me before is that his death doesn’t advance the story in any way. Han, the central villain played by Shih Kien, murders Kelly’s character, Williams, due to an unfortunate misunderstanding. While this doesn’t disrupt the story, it doesn’t advance it either, and ultimately his death only serves the purpose of Han trying to intimidate Lee by showing him what he did to Williams which isn’t really necessary because Han is totally badass, too.

If anyone should have been killed it should’ve been John Saxon’s character, Roper, who isn’t even a fraction as cool as Kelly and doesn’t really do much in the film besides bang Han’s madam. Another character of lesser coolness could’ve been added to be knocked off instead of Williams, or the script could’ve easily been rewritten to keep Williams alive.

The image of the black martial artist with an afro that’s used in pop culture today was influenced by Kelly just like the image of the skinny Chinese martial artist was influenced by Lee, and to see these two iconic personas fighting back to back in the melee battle at the end of Enter the Dragon would’ve been a whopping 10 scoops of awesome. I dare you to disagree with me, and a big slap on the wrist goes to whoever’s idea it was to kill him off.

Movie Trailers Have Gone Too Far

My next gripe is with movie trailers. For crying out loud, stop showing the whole film! It’s something that’s been happening for a while, but it’s officially out of hand now.

A good movie trailer gives you a small taste, but the trailers these days literally walk you through the story beat-by-beat stopping short of the climax of the film. What I’m led to believe is that the executives don’t think people want to go see the film unless people know everything about it, but that couldn’t be further from the truth.

The marketing campaign for Cloverfield was the best I’ve seen in a long time because they revealed very little, and what they did show left you wanting more.

Some trailers even go as far as revealing what transpires in the third act of the film. Trailers are supposed to create anticipation, not make you want to wait until it comes on TV.

I am very confident that if the studios would experiment with more ambiguous trailers, they’d create more interest. In the meantime, people who release movie trailers that show too much can get a big slap on the wrist, too.