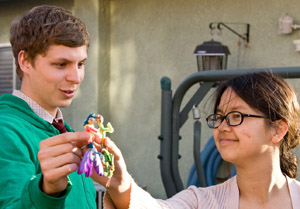 Starting tomorrow, and for the next 10 days after, the Los Angeles Film Festival turns UCLA’s Westwood Village into the city’s annual movie-centric street fair, spreading itself wider than ever (but never too thin) for its 15th year by giving movie fans and industry professionals from across the spectrum an eclectic schedule to pick from.

With 11 screens crammed into 12 square blocks – and four more within driving distance – LAFF will screen over 200 narrative, documentaries, shorts and music videos for an expected 85,000 attendees. And although the festival showcases new American and international films starring well-known actors – like just-happened Cannes or winter’s diamond-encrusted Sundance – the next week is less about celebrity glitz and more about community-building.

The LAFF is known for its series of conferences, forums and casual talks with some of cinema’s finest – like this Sunday’s “Coffee Talks,” weekday afternoons’ Filmmaker Lunch Talks and the Poolside Chats on Wednesday and Thursday – where hot-button industry topics like homosexuality, tapeless recording, financing and the intersection of art and film are open to discussion.

Then, of course, there are the movies; and from the narrative competition to free screenings of Hot Rod Girl in the middle of Broxton Avenue, LAFF is a conglomeration of film events as different as the city, itself.

In addition to Hollywood-worthy independents, like opening night’s Paper Man where Ryan Reynolds plays a superhero living inside Jeff Daniels’ imagination, and unique documentaries, Carmen Meets Borat follows the aftermath of the filming of the movie Borat in a Romanian village, LAFF offers seven programs of shorts (two are exclusively of shorts made by high school students), three programs of music videos (one comprised of ’90s alternative videos made by Propaganda and Satellite Films) and a slightly out-of place Texas filmmaker showcase.

Movies starring independent names like Paul Giamatti (Cold Souls), Michael Cera (Paper Heart) and Zooey Deschanel ([500] Days of Summer) run rampant all week and mini-film festivals like Gael Garcia Bernal and Diego Luna’s traveling movie project, the Ambulante Film Festival (which will be represented by three films at LAFF: Born Without, El General and Rehje) and the DONKAPHANT Film Festival (which highlights teenagers running for political office with The Youngest Candidate) are integrated into the rotating screening schedule.

There are also several special events throughout the week, such as the North American premiere of the six-hour Crude Oil documentary, which follows a day on a remote Chinese oil field (It is shown in two three-hour screenings.), a special, $35-per-ticket showing of Transformers: Revenge of the Fallen two days prior to its theatrical release and a Tuesday night gala for the Johnny Depp and Christian Bale long-awaited gangster film, Public Enemies.

And to aid in the discussion between art and film, Los Angeles’ long musical history is also represented with screenings of It Might Get Loud (footage of a 2008 jam session with Jimmy Page, Jack White and the Edge), When You’re Strange (unreleased clips of the Doors narrated by Johnny Depp) and All Tomorrow’s Parties (performances from last year’s music namesake music festival – screened at the Ford Amphitheatre!).

But for all of the new films being presented, LAFF also gets nostalgic: Broxton Avenue’s free, outdoor, inflatable-screen showings include Friday night’s Ghostbusters, Saturday night’s The Muppet Movie and next weekend’s finale to the UCLA Film and Television Archive’s festival-long celebration of hot rod flicks; classic film renegades are remembered with special showings of 1969’s Midnight Cowboy (Jon Voight will answer questions beforehand.) and Billy Jack (Writer/director Tom Laughlin will be in attendance.); and the official final event of the festival is a W Hotel-hosted, 10th anniversary screening of Election.

Overwhelming and exciting all at once, the Los Angeles Film Festival manages to cram an entire year’s worth of premieres, discussions and retrospectives into 10 days and everyone is invited. Pay for individual screenings, splurge on an all access pass or take the bus down Wilshire for one of their many free screenings because from documentaries concerning Honduran banana pickers to Andy Warhol’s famous test screens, LAFF has, again, united our vast city by its common blood – film.