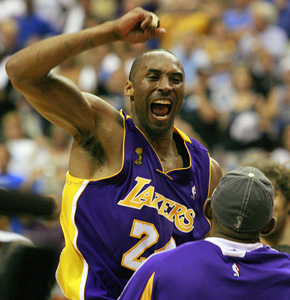 “The night and the championship belong to the Lakers,” proclaimed NBA Commissioner David Stern as he presented the Larry O’Brien trophy to the team.

This statement captured the entire evening, from the first quarter to the fourth of Sunday’s game in Orlando. The Magic seemed like their spirits were totally deflated early in the match, as opposed the energy and aggression the Lakers maintained all the way to their 99-86 win, taking the series 4-1.

Kobe Bryant won his first Finals MVP honor, newly christened the Bill Russell Award this year. He averaged 30 points, 5.5 rebounds and five rebounds per playoff game. Bryant and Derek Fisher both entered the league in 1996 as part of the Lakers and have won four rings together.

With this title, Phil Jackson surpasses Red Auerbach with 10 NBA Championships during his career as a coach – six with the Bulls and four with the Lakers. Jackson hasn’t confirmed whether he will return for another season in Los Angeles.

The Lakers victory parade takes place today at 11 a.m., beginning at Staples Center then proceeding down Figueroa Street to the Coliseum.