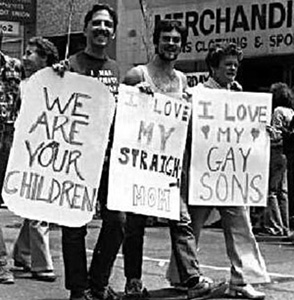 AIDS is making an alarming comeback. The Journal of the American Medical Association reports that HIV infection among gay men is increasing. The study clearly implies that people highly susceptible to contraction are becoming less cautious.

Despite the information, the knowledge, the warnings that permeate all aspects of health promotion in the United States, statistics don’t lie. People have either stopped listening … or stopped caring altogether.

Sex Positive explores the life of Richard Berkowitz, a revolutionary gay S&M hustler turned AIDS activist in the 1980s. Berkowitz contracted HIV at a time when the AIDS virus could be “caught” like the household cold. Fear and insecurity swept a nation that was still not completely accepting of homosexuality.

Delving into great detail about the rampant promiscuity of the underground gay community in New York City in the early ’80s, the good Jewish boy-turned-sexual deviant partnered with activist Michael Callen to virtually invent safe sex.

Attacked by the media for pushing the “dwindling” disease, Berkowitz emerged from the epicenter of the epidemic demanding a solution despite criticisms. This film underscores the explicit bravery of the innovative advocate whose passion went nearly unrecognized. Now destitute and alone, Berkowitz’s story is told without the glamour of Hollywood, but with the same passion.

A documentary like this needed to be made, and what better time than now. The emergence of texts and films dedicated to the gay rights movement in the ’80s allude to and, in many respects, parallel the current conflict over gay marriage in California, which remains indefinitely in limbo.

In theory, Sex Positive is insightful and captivating. Berkowitz is a tragic hero in the gay rights movement who transferred his fame onto the promotion of safe sex. He is a brilliant and passionate man whose accomplishments should be known. But he is also incorrigibly cynical about his anonymity.

Director/producer/editor Daryl Wein is just 25 years old and has incredible promise as an artist. His research is thorough, and his ability to set the appropriate tone for the piece is impressive, especially since Wein was born the year that Berkowitz wrote the safe sex manual.

My mixed feelings about this film stem from the fact that the majority of the 76 minutes is spent in a jumbled, unfocused state of confusion about where the filmmaker wants to take the text. In the wake of Gus Van Sant’s glorious biopic Milk, about the life and death of the first openly gay politician Harvey Milk, this piece of historical retrospection does not affect the audience in ways it most definitely should.