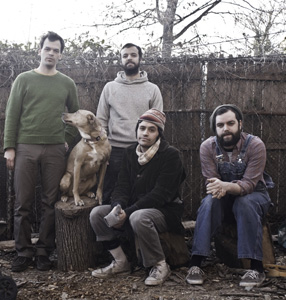 It’s a rare thing these days to see a band constantly reinventing its style while keeping things fresh and interesting. As it turns out, though, it’s not that difficult. All that’s needed is a little effort.

“I think we really try,” mewithoutYou guitarist Michael Weiss laughs. “I know that sounds like a lame answer, but we really try to do it. We don’t just sit back and hope it happens. For the most part, every band probably wants to take steps as the years go by. I’m sure every band likes the idea of moving in a new direction and not being just completely stagnant.”

The band’s sonic change permeates throughout its newly released fourth album, It’s All Crazy! It’s All False! It’s All A Dream! It’s Alright. Filled with musical twists and turns, it stays rooted in folk tradition while sounding unlike anything else out there.

“I think we just thought that with the new record we wanted to have a different approach to our music,” Weiss explains. “We wanted to take the things that sounded a little outrageous to us at the time for making Brother, Sister and then use that as the starting point for this record. We let that be the norm. Honestly, I feel like we’ve finally come to a sound that is really what we’ve been trying to do.”

To achieve this, the band, which features Weiss’ brother Aaron on vocals, Greg Jehanian on bass and Richard Mazzotta on drums, brought on a composer for the first time to help flesh out the diverse musical arrangements. Additionally, the band moved from two guitarists to one, placing more of an emphasis on acoustic guitar this time around.

“It seems like we’ve sort of met our quota for the big guitar rock stuff. That is to say that it’s just not what’s naturally exciting to us anymore,” Weiss confesses. “Maybe that’s how it works. You just sort of lose your inspiration to continue with one particular method of writing music. You try to write those kinds of songs just because that’s what you think you’re supposed to be doing when you realize, ‘Oh, crap! This sucks. It’s not good.’ It just sort of sorts itself out for you.”

Meanwhile, the band’s lyrics are also radically different than on previous albums. In addition to the group’s well-known penchant for Biblical allusions, the writing was also heavily influenced by the teachings of Bawa Muhaiyaddeen and often takes the form of animals, pastries and parable storytelling. It’s a simpler technique that stands in stark contrast to the intricate lyrics of mewithoutYou’s past.

“I think what Aaron likes to do lately with writing his songs is to really overstate a particular idea. If there’s just one thing that you’re going to take from a song, it’s going to be this one notion,” Weiss points out. “If you’re going to be very repetitive and make that a part of your style, then at least let the lyrics be really good. That’s where I reconcile the whole thing.”

While there’s been some speculation this might be mewithoutYou’s final album, Weiss – also a part-time substitute teacher – says the group hasn’t decided what it will do next and is just playing everything by ear. For now, he appreciates the simple fact the band has an audience and he gets to share all of this with his brother.

“The guy writes amazing songs. I get to play music with him, you know?” he says. “It’s truly a blessing. If you ever wanted to bottle that term up, this experience for me has just been a blessing.”

It’s all Crazy! It’s all False! It’s all a Dream! It’s Alright is currently available. mewithoutYou will perform June 20 at the El Rey and June 21 at the Glass House. For more information, visit mewithoutyou.com.