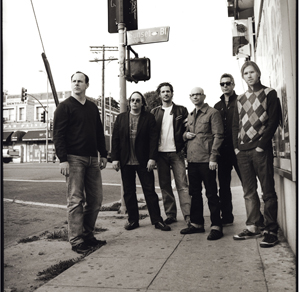 Greg Graffin is sort of the Superman of UCLA. His cover identity is Dr. Graffin, mild-mannered biology professor. But when a distress signal comes from any of thousands of nightclubs or music festivals around the world, Graffin knows exactly what to do. A quick change of clothes and he’s Greg Graffin rock star, ready to save the day!

Graffin is, of course, the singer for the long-running punk rock group Bad Religion, but all through that band’s career Graffin has found time for academics. Graffin got his PhD at Cornell, but he earned his master’s at UCLA and decided to come back to campus to begin his professorial career.

Graffin will be working at his other job through the summer as Bad Religion participates in the Warped Tour through mid-August before heading to a series of dates in Australia and New Zealand. The group is also celebrating the recent release of a deluxe version of their New Maps of Hell album that contains lots of stuff not available in the original offering, including three new songs, seven new acoustic songs, two double-sided Bad Religion posters and a previously unreleased concert on DVD.

If you want to see Professor Graffin rockin’ out, your next chance is when the Warped Tour launches in Pomona June 26.

Sonic Youth’s Kim Gordon is another UCLA alum who’s been rocking for a long time and still going strong. The singer/bassist has seen Sonic Youth go through a lot of changes over the years, including several label changes.

The band at one time recorded for SST, the SoCal-based label overseen by another UCLA alum, Greg Ginn of Black Flag, but after a recent stint with Geffen the band has just released a new effort through Matador called The Eternal. The disc is said to reference every era of the band’s history, so fans can expect to hear the primal Sonic Youth of the old days along with the more-focused sound that the band has explored recently.

They’ll be playing a little bit of everything during their summer tour, and they’ll be playing it for free when they appear for the Twilight Concert Series in Salt Lake City July 30. No SoCal dates are planned at this time, but the band’s calendar is open after an Oakland date Aug. 2.

Foreign Born to Play the Hammer

L.A.-based quartet Foreign Born wants you to get out of the house – at least into your yard. The band has a big sound, and they’re sometimes referred to as an “anthem” band without the big “fist-pumping” anthem.

The band counters with the remark, “Hey, anthems only last for a summer. Our new album Person to Person delivers the soundtrack for the backyard BBQ of the ages!” Person to Person drops on the Secretly Canadian label June 23, so you can put the CD on your cookout shopping list along with the burgers and beer.

A couple of weeks later Foreign Born play the Hammer Museum at UCLA; the July 16 show is free and takes place in the museum’s courtyard at 8 p.m.

Koffeehouse Sessions Come to the Westside

Koffeehouse Music Productions and Spin Public Relations have teamed up to sponsor a Westside performance showcase for emerging bands and singer-songwriters. The Koffeehouse Sessions will happen on the first Thursday of every month at Harvelle’s in Santa Monica.