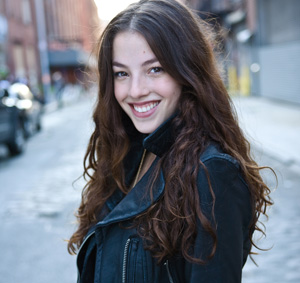 Olivia Thirlby is perhaps best known for three little words: “Honest to blog?” Rising to fame as Ellen Page’s idiosyncratically eloquent best friend in 2007’s award-winning sleeper hit Juno, the New York native has been on the fast track to success ever since. This month, her express train makes a stop at Geffen Playhouse for “Farragut North,” a play titled after the Washington, D.C. metro station at the center of the lobbyist district.

Set during the campaign phase of a close and contentious presidential race, the show opened off-Broadway in November 2008 before moving to the West Coast with much of its ensemble cast, including Thirlby and her co-stars Chris Noth (“Sex and the City”) and “The Wire”’s Isiah Whitlock Jr., intact. Joining the re-incarnated production is newly anointed megastar Chris Pine (Star Trek) as a young press secretary who gets caught up with Thirlby’s character, Molly, an ambitious and libidinous Lolita of an intern.

“It’s been great,” Thirlby says, sounding elated, if slightly exhausted, just a few days before the show opened. “It’s been an excellent transition. We have [Pine] playing the lead role, and he’s really on top of everything. That’s making it easier, and I think it’s inspiring the rest of us, too.”

Having studied at London’s Royal Academy of Dramatic Arts and the American Globe Theatre, Thirlby is deeply rooted in the theater, and her jubilation about returning to the stage in a role she originated is palpable.

“The word ‘exciting’ falls eons short of how I feel,” she continues giddily. “Film is great fun and is challenging and rewarding in its own ways, but it doesn’t compare to being onstage saying the same words every night and ironing out, over and over, the same collection of moments until you find the real meaning that’s there. It’s not something you get to do with film.”

“Farragut North” was written by Beau Willimon, a former intern for Charles E. Schumer during his successful senatorial run and a junior staffer for Howard Dean in his 2004 presidential bid that started on a hot streak and turned into a meltdown. Willimon’s knowledge of daily political workings and experience in the inner sanctum is what makes the play “fascinating” according to the actress.

“What most people see of politics has a lot to do with what the media gives you and how the candidate chooses to present his or herself,” Thirlby explains. “What you see in the play is behind the scenes. You get to look at what happens to create a story that will then, after permutations, finally hit the press and the public.”

She continues, “I think the play, at its heart, is about trust and how mistakes, misunderstandings and betrayals can happen within the umbrella of trust. So much of this play is about manipulation and spinning and getting people to feel a certain way.”

Admittedly, as an actress in Hollywood, a great deal of her job is about spin as well. In June 2008, Vanity Fair published an article announcing the posse they’d ordained as “Hollywood’s New Wave.” Thirlby, along with the Jonas Brothers and cast members of Twilight and “Gossip Girl,” was hailed as part of the avant-garde. But don’t expect her to start gallivanting around with a Brat Pack. She immediately brushes off any mention of those titles, insisting she is simply “an actor.”

“There is an element that goes along with [success], and you have to play along with it,” Thirlby offers with a quiet dignity, “but it’s not really what’s important about what I do.”