Wordplaying My Time at UCLA 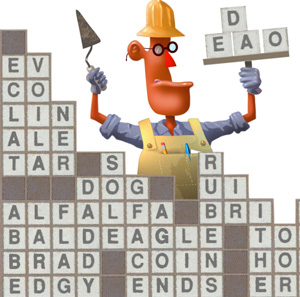 I still remember, quite clearly, the first time I cracked open the Daily Bruin and stumbled upon the crossword section. It was something I had never tried before, something I had ignored in favor of an incredibly fast Internet connection.

But alas, sitting through Philosophy of Science was woefully boring, and so I turned to my last hope for entertainment, the grid tucked in amongst the classifieds. And even after so many years, that initial feeling is still imprinted in my mind: a feeling not of fun and excitement, but rather crushing, demoralizing inadequacy.

I could not do the crossword. But, seeing as this was before Sudoku appeared, I stuck with it, if only because it saved me from having to actually listen in class.

Slowly, but surely, I learned how to do the crossword. By filling in that easy pop culture reference, I would effectively open the way for so many more clues, each a mini-puzzle interconnecting and complementing each other.

It’s a metaphor for everything at UCLA and beyond, really. Things can be frustrating, vague or absolutely baffling (not to mention the loads of useless knowledge), but you start with what you do know, and you build upon it.

In that sense, the crossword puzzle was more important to me in college than parties, floor events and university-level classes. It became a fixture of my life – a way to unwind, bond with friends and stave off Alzheimer’s.

Whether alone or with others, I remember doing the crossword in the library in between classes, on Janss Hill on a particularly nice day, in the study lounge as a break and, of course, in class. Even my first kiss came while we were doing the crossword together.

And just as I had to move on and find a job after college, I moved on, sadly, from the Daily Bruin crossword to the New York Times crossword. While I feel tremors of that initial demoralized confusion – particularly on puzzles past Wednesday – I understand that the Daily Bruin crossword had its time and place, and that now it’s time to continue to a brighter, and punnier, future.