The Hitchhiker's Guide to the Galaxy: (Touchstone) 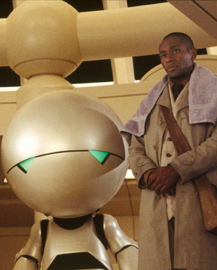 Don’t panic, as the writer of The Hitchhiker’s Guide to the Galaxy would say. The long-awaited film adaptation of Douglas Adams’ wildly popular 1970s radio series turned book series turned British television series keeps most of the concepts and humor intact.

Marvin the robot is still depressed (and voiced with marvelous moroseness by Alan Rickman), and the story still begins with the world coming to an end when the Vogons find Earth is in the way of a hyperspatial express route through their star system. But, as if fearful that American audiences would find this a bit too upsetting, wrongs are righted and romance blossoms as Arthur Dent (Martin Freeman), the hapless Earthman who survives by hitchhiking a ride on the Vogon ship, finds true love in the arms of lovely, brainy Trillian (Zooey Deschanel).

All this nicey-nice stuff softens the bite and the flight of the original, but who knows who gets the blame or credit for that. Maybe Garth Jennings, in his directorial debut, doubted the ability of American audiences to get the full brunt of Adams’ cynicism about life, the universe and everything. Or maybe Adams, who shares screenwriting credit with Karey Kirkpatrick. softened up before his untimely death of a heart attack in 2001 when he was just 49.

The story may seem bizarre to those unused to taking their science fiction funny-side up. While Star Wars director George Lucas attracts a quasi-religious cult of Force followers, Adams takes an atheistic approach. In other words, if you have trouble with the theory of evolution, wait until you find out about the little planet-building business a guy named Slartibartfast (Bill Nighy) runs out of an otherwise obscure little world named Magrathea.

Arthur Dent is busy protesting the demolition of his house when his friend, Ford Prefect (Mos Def), lets him know he has bigger things to worry about, namely the demolition of the world. Ford (who picked his name because when he came to Earth he thought cars were the dominant life form) lets Arthur know that Ford is actually an alien writer for The Hitchhiker’s Guide to the Galaxy, stranded on Earth for the past 15 years, while waiting for a ride.

Ford and Arthur finally get that ride, sneaking on the departing Vogon ship, just before the Earth explodes. The adventures begin as they catch yet another ride with the dim, ever-smiling two-headed Zaphod Beeblebrox (Sam Rockwell with a vapid, everpresent grin) – living proof that two heads are not better than one – and Trillian, a woman whom Zaphod picked up on Earth. Zaphod is on the run from his job as president of the universe after stealing the ship they’re riding in.

Why did he steal the ship? You’ll have to read the book to understand that, and even then ... good luck! Plot follow-through is not a strong suit. But adventures and jokes ensue as Trillian gets captured and, when, rescued, joins the others in a search for the answer to the meaning of life. And they find it, too.

Sorry, can’t give it away, not that the answer does anyone much good in this story. Far more useful is the advice given by The Hitchhiker’s Guide to the Galaxy: Don’t panic. And bring a towel. Don’t be surprised if you spot a few among audience fans.