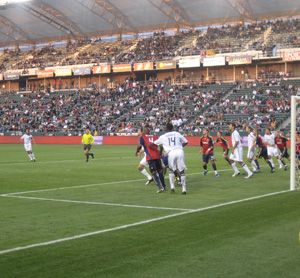 Head coach Bruce Arena was not happy with the loss Saturday night, but he accepted the fact that the visitors were superior.

“I think we were outplayed, and we didn’t play well,” Arena stated in a post-game conference. “They [Real Salt Lake] were a step quicker than we were.”

A 10-match unbeaten streak ended as the Los Angeles Galaxy suffered a 2-0 home loss to Real Salt Lake at the Home Depot Center in front of 19,718 fans. Real Salt Lake (4-6-3) arrived in Carson with a seven-game winless streak, but it truly did not show, as the visitors appeared to be far superior to the Galaxy (2-2-9).

“Coming back home for me was special to play and succeed,” Movsisyan said outside the locker room of the homecoming and the energy it provided.

Los Angeles heads to San Jose for a clash against the Earthquakes Saturday at 1:30 p.m., which can be seen on ESPN2.