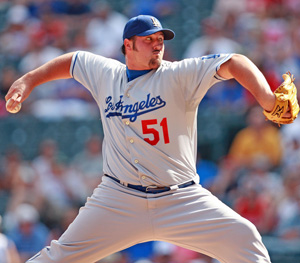 Going into the 2009 season there were many analysts who expressed doubts about the viability of the Dodgers’ pitching staff. Among the biggest concerns were the relief pitching and the question of who would fill the important role of closer.

Early on, Joe Torre had expressed confidence in 24-year-old Jonathan Broxton, but many had their doubts. The big kid from Georgia had pitched erratically since his 2005 arrival in the big leagues. Nobody could deny Broxton had heat on his fastball, which often clocked around 100 mph, but control problems and the failure to mix-up his pitches often led to a lack of consistency, which made him dangerously hittable.

Others questioned his temperament. Unlike an Eric Gagne or K-Rod, he didn’t race in from the bullpen with a high-strung intensity. If he blew a save or lost a game, which he did more than once, he didn’t rage into a violent tear. He rather slunk off the field with an ‘aw-shucks’ manner.

Broxton beams a wide, friendly grin. Frankly, he looks too nice. How could a man with such a sweet smile have the dominance necessary to be an effective closer?

And yet so far this season, Broxton has been astonishingly dominant. Appearing in 29 of the Dodgers’ 64 games thus far, Broxton has had a hand in over half of their victories. With a 6-0 record, 16 saves and 1.41 ERA in 32 innings, the naysayers and doubting Toms have been silenced.

While off the field he can be well described as a gentle giant weighing in at 295 pounds and standing at six-feet-four-inches, on the mound he strikes terror into the hearts of batters. As 100 mph fastballs whiz past them, batters often have the look of just giving up as they flail helplessly with their sticks.

Another dominant pitcher, Sandy Koufax, was once asked if manager Leo Durocher’s famous quote, “Nice guys finish last,” was a truism. He replied, “In the end it comes down to talent. Can nice guys win? Sure they can, if they have talent.”

And so it appears big Jonathan Broxton is weighing in on the Koufax side of the argument.

Last week Broxton became a father. After flying home to be with his wife for several days, he rejoined the Dodgers last Saturday. When brought in to close out the game Sunday, he promptly struck out the side. Broxton has proven to be a fantastic closer, and I think it’s safe to say he’ll be a great dad.