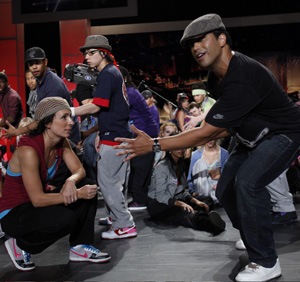 Catch choreographers Tabitha & Napoleon from “So You Think You Can Dance” on June 19.
(Credit: Courtesy Fox Broadcasting Co.)

The genre of dance art film has long sought a proper home. In the past, dance films of the non-Hollywood variety were awkwardly classified as art films and seen only in obscure festivals. The Dance Camera West Dance Film Festival was thus conceived to provide a proper venue for this unique genre.

Now in its eighth year the little-festival-that-could has become legendary for its eclectic events and film screenings throughout the month of June. With inclusiveness as one of its stated objectives, the festival features a wide variety of dance media and styles, from the most abstract surrealism to the most shamelessly commercial glitz and glamour. The subject matter of films varies from ballet to hip-hop.

The producers of the DCW film festival have an uncanny knack for creating events of magical inspiration. This coming weekend the festival closes in grand fashion with three events that promise to be as interesting as they will be fun.

On Friday night, the Choreography Media Honors Panel at Linwood Dunn Theater (1313 N. Vine St., Hollywood) will showcase the work of some of the biggest names in film and television choreography, who will also be in attendance for a panel discussion. Moderated by renowned choreographer Daniel Ezralow of Across the Universe, the panel will include the likes of Kenny Ortega, the director and choreographer of “High School Musical,” Matthew Diamond, director of the “So You Think You Can Dance” and the team that produced the magnificent opening act of the Academy Awards this year. A reception with food and cocktails will follow, so dress sharp and be prepared to schmooze.

On Saturday night, a free tango class with live music at the Braude Center Plaza (6262 Van Nuys Blvd., Van Nuys) at 7 p.m. will precede a free outdoor screening of the latest dance films from Latin America. One is advised to bring blankets and a picnic dinner for this enchanting evening.

On Sunday, June 21, at the Autry National Center of the American West (4700 Western Heritage Way, Los Angeles), the festival closes with Contemporary Sacred, a screening and discussion on indigenous dance artists in contemporary culture. Two acclaimed documentaries on the subject will be screened and a Q&A will follow with one of the directors of Byron Chief-Moon: Grey Horse Rider.