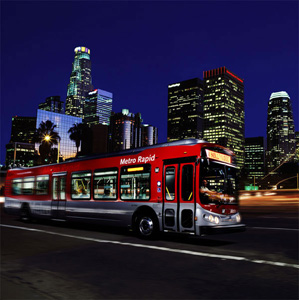 Hop on the Metro Rapid to get to Downtown from Westwood.
(Credit: metro.net)

It might not surprise you to hear that UCLA receives more applicants than any other university in the United States. Of course, the allure of the “entertainment capital of the world” would leave any fresh high school grad buzzing with illusions. Wild rides down the Sunset Strip with celeb friends you managed to impress with your paranormal SAT score, right?

Despite ambitious notions of a life that could, Los Angeles doesn’t manifest in the lives of its beloved university students, as it should. Students come from all 50 states and over 100 countries, to the center of the second largest city in the United States, yet far too few really break out of the two-mile radius that is Westwood Village.

Whether it’s the “Westwood bubble” that cunningly sucks students into its wonderfully paved, fully-accommodating streets and forbids them from exploring past its limits, or Los Angeles’ skimpy excuse for a public transportation system that turns a 15-minute drive into a 70-minute test of patience, there is something wrong with this picture. As a Los Angeles native, I want to encourage exploration of the city because too often, I speak to students who have never ventured out past Cabo Cantina “that one time … on Cinco de Mayo.”

Although Westwood manages to provide to our every beck and call, it’s acceptable to break free from the chains of convenience every so often. To spend four years in a city as versatile as Los Angeles and not know anything about it would be a shame in my book.

From what I can gather, transportation is part of the problem; a lot of students don’t have cars. I might consider this a legitimate claim if I didn’t spend way too much time daily looking for parking in the village. This means that there are definitely cars to be used to drive around the greater L.A. area – you just have to express your want to use them.

It’s probably more seemly than you think to suggest venturing over to landmarks like Roscoe’s Chicken (roscoeschickenandwaffles.com) the next time your buddy scoops you up to grab a bite. Driving 15 minutes (do not even think about this between the hours of 4 p.m.-6 p.m.) in virtually any direction can lead you to a different part of the city. Perhaps, the next time you make a wrong turn, just keep driving until you get to Culver City, or venture to Downtown and visit the art galleries.

Public transportation is another viable option to get you around – as long as you take a good book to pass the time. UCLA students read while walking, jogging and eating lunch, so it’s not so crazy to suggest they do it while sitting on the bus on their way to the observatory.

Perhaps a few Google searches can help you uncover what’s available to you – a lot of which may be closer than you think. Great shopping, free concerts, monthly cultural events, awesome (and cheap!) dining, cool bars, theatrical performances (yes, theater) and different crowds are just some of the things you might come across.

In my experience, keeping up with friends at colleges in backwater towns urges me to seize the options available to me in a metropolis. After all, isn’t that part of the reason we came here in the first place?