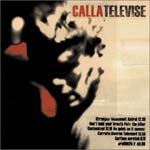 Calla…Calla…Callafornia? No, you silly goose. This band of brothers——well, more like friends, actually——hails from New York, where there’s apparently some sort of a "scene" going on. If there were a "scene"——implying that, much like a solar eclipse, that cozy little town only churned out noteworthy bands once every five or ten years——Calla probably wouldn’t be a part of it.

Quick, a little history, before we forget: an aggregate called The Factory Press came out of Denton, TX in the mid-‘90s. It relocated to NYC, recorded an album with Kid Congo Powers, and broke up soon after. Remnants = Calla.

So think of a high school classroom, and imagine the guys in the back who weren’t spitting spitballs or applying black lipstick…the ones who just did a lot of thinking and watching. This is Calla, a three-piece ensemble that has its finger on the pulse of how music ought to be moving all the time: very, very carefully.

But wait. First consider this excerpt from the title track: "Sound is on, infecting everything that is on / As long as you’re aware not / To stare too close / You’re getting much too serious." Okay, then, Calla, we’ll try to remain lax. Even if we find ourselves reeling after examining your razor-sharp sword. Even if it’s impossible to crack a smile, speak in anything but a whisper, and not get lost in our own thoughts as your reflective tomes gently caress our ears. Man, that’s sexy.

A lot of great dead bands come to mind, listening to this album: June of 44, Slint, Bedhead, Acetone. But with the operative word in the previous statement being "dead," it’s a relief knowing that a group like this is moving around somewhere within the big vat of vegetable soup that is rock music.