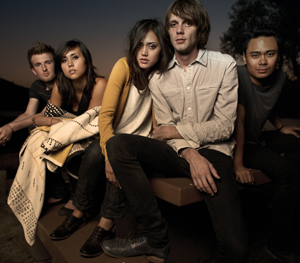 Not many bands would name an album after Mozart. Then again, most bands aren’t like Meg & Dia, a sister led pop-punk group from Utah.

“Meg had read some quotes from him in a book she was reading, and it just really inspired her,” vocalist Dia Frampton recalls. “He was talking about how music is from here, here and here – your heart and your mind and your ears.”

Meg & Dia, which consists of Dia’s sister Meg and Carlo Gimenez on guitar, Jonathan Snyder on bass and Nicholas Price on drums, has always been unafraid to turn to unexpected places. In addition to foreign films and Tom Petty, Frampton often seeks out literature, as she did when facing the deadline writing for the new album, Here, Here and Here.

“I actually drew inspiration from this really amazing book called Brave New World that I read at the time,” Frampton confesses. “I’m constantly doing that. If I can’t find inspiration in my own life, I’ll look to other people’s lives.”

Frampton, who discovered a love for singing when her parents gave her a karaoke machine as a young girl, also played a larger part writing the band’s sophomore album as a whole.

“On our last record Meg wrote probably 85 percent herself, and then the rest was just me popping in with little ideas here and there. This new record I would say is mostly 50/50,” she admits. “We did a lot more collaborating together on this record with each other because we usually go off in our own little worlds.”

Now that the record is finally out, Meg & Dia will turn their attention to the challenging task of Warped Tour, which they will play all summer long.

“It’s hard to shower on the road, I’m not going to lie. I get really homesick a lot,” Frampton says. “It’s really hard to have a normal relationship on the road, but it’s great to meet new people and always be in a different city.”

Meanwhile, now that the band has a solid lineup in place for the first time, Frampton is finding comfort just being in her own skin.

“I find whenever we try to stick out, it ends up being corny and weird. We just have to be ourselves,” she points out. “We’re very reserved as people and just want to keep playing the music that we like.”