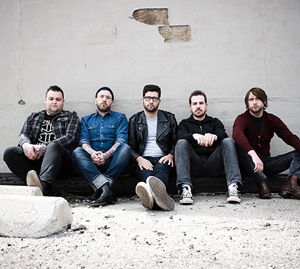 Canada’s Alexisonfire struck platinum in their homeland and won lots of new fans in the States upon the release of their Crisis album a couple of years ago, and they hope to continue their successful run with their new one for Vagrant, Old Crows/Young Cardinals. That should be no problem according to singer George Pettit who says that the effort builds on what Crisis offered and moves at a feverish pace.

“The lyrics span from metaphysical rebellion to living as a nomad and represent the entire history of our band. I feel it is our best record yet, but you get to be the judge on that,” says Pettit.

Old Crows/Young Cardinals is available for judgment now, and you can catch Alexisonfire on Warped Tour all summer, including the June 26 Pomona, June 28 Ventura and Aug. 23 Carson stops.

Fuel TV and Rockstar Energy Drinks have announced the Mayhem Metal Madness contest whereby one lucky fan will be chosen to fly to Philadelphia and then tag along on the Mayhem Festival Tour for three days. Besides the flight and lodging, the winner will receive VIP backstage passes, a Rockstar edition Ernie Ball Music Man guitar, a gift bag holding $250 in goodies and a $500 shopping spree at Hot Topic with Job For A Cowboy.

The winner will also meet all the other bands on the tour including Slayer, Marilyn Manson, Killswitch Engage, Bullet For My Valentine and Cannibal Corpse. Entries will be taken through June 30 at fuel.tv/mayhem, and the winner will be announced July 10. Entrants must be 18 or over.

The Mayhem’s local stop is at the San Manuel Amphitheatre in San Bernardino July 12.

Lots of good free downloads are available right now, and there is a little something for everyone. First up is a seven-cut sampler from 13th Planet Records, the label helmed by Al Jourgensen of Ministry. Go to vampirefreaks.com and grab unreleased songs, remixes and videos by Ministry, Revolting Cocks, Prong, False Icons, Stayte and Ascension of the Watchers featuring Burton C. Bell of Fear Factory.

Sage Francis has released another mixtape in his Sick of… series, this one entitled Sick of Wasting. The sixteen-track compilation includes lots of brand new music along with a few demos and home recordings from the late ’90s. Grab your copy of Sick of Wasting absolutely free at anti.com.

Perhaps the most unique of the giveaways is the new mixtape from TRV$DJAM called Fix Your Face Vol. 2 – Coachella ’09. The new music from Travis Barker and DJ AM is free, but it’ll cost you in the form of one tweet. Go to twitter.trvsdjam.com and re-tweet the message you find there, then download the tunes.

If you haven’t yet heard the music of Trevor Hall, you’ll soon have ample opportunity. The 22-year-old is a buddy of Matisyahu, and the pair have written and recorded a song called “Unity” that’s getting a lot of exposure prior to its official release on Hall’s self-titled debut for Vanguard.

Hall will perform “Unity” and other acoustic rock and reggae numbers when he appears June 26 at the Roxy; Trevor Hall drops July 28.

Exene Cervenka, vocalist for the highly influential L.A. band X, has announced that she has Multiple Sclerosis. The singer remains in high spirits though and says the condition will not cause any cancellations of X shows or delay her upcoming solo effort for Bloodshot Records. You can send a message to Exene through her MySpace page.