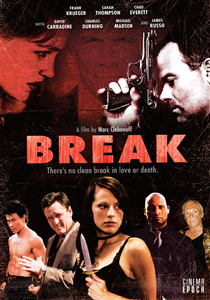 In memory of the late David Carradine, USC’s school of Cinematic Arts will screen the stylistic noir Break, Sunday, June 28 at 7:30 p.m. at the Norris Cinema Theatre/Frank Sinatra Hall followed by a Q&A with cast and crew. Break is about an introverted hit man named Frank who is contracted to carry out an unusual job. When a crime boss discovers that he’s terminally ill, he enlists Frank to carry out his own assassination, but obviously, things get complicated. Admission is free. Obtain tickets online at cinema.usc.edu.

UCLA’s New Dean of School of Theater, Film and Television

The appointment of Teri Schwartz as the dean of UCLA’s School of Theater, Film and Television has been approved by the UC Board of Regents, and will go into effect July 1.

Schwartz learned about indie filmmaking while working for Roger Corman’s New World Pictures in the early ’70s and has developed and produced hit movies, including Sister Act, Beaches, Joe vs. The Volcano and True Identity.

Schwartz is taking over a position previously occupied by Robert Rosen, the founding director of the UCLA Film & Television Archive, for 11 years.

“This is an extraordinary opportunity at a unique time in our history,”

Schwartz said in a June 16 release from the university. “I’m thrilled and honored to become the dean of a premier school. I look forward to leading the effort and, with our community, creating a distinctive vision and long-range plan that will guide us into a very exciting and dynamic future together.”

The Cove screens at USC.

USC’s School of Cinematic Arts Screening Series will show The Cove, Thursday, June 25, followed by a Q&A with director Louie Psihoyos and marine mammal specialist Richard O’Barry. The Cove tells the true story of how Psihoyos, O’Barry and a team of activists, filmmakers and freedivers embarked on a covert mission to penetrate a hidden cove in Japan.

The screening will be at the Eileen Norris Cinema Theatre/Frank Sinatra Hall at 7:30 p.m. Admission is free. Obtain tickets online at cinema.usc.edu.