Gabrielle Union: The State of this Union is Good 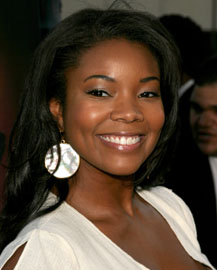 Behind Gabrielle Union’s sunbeam smile and Nebraska-bred sweetness is a brave actress.

It’s what prompted her to take the iconic role of harried wife Alice Kramden opposite Cedric the Entertainer, as Ralph, in The Honeymooners, opening in June.

And in Neo Ned, a quirky indie movie that screened last week at the Tribeca Film Festival, she plays a mental patient who avoids memories of sexual abuse by pretending to be Adolf Hitler.

Then she falls in love with a patient who’s a neo-Nazi (Jeremy Renner).

“I read the script and thought, ‘This makes me completely uncomfortable – that’s a good sign,’” says Union.

Born in Omaha, the 31-year-old actress moved to California at a young age and graduated from UCLA intending to be a lawyer. But after doing some modeling, she happened into performing, and TV and film roles came quickly.

She played the tough squad leader in the cheerleading comedy Bring It On (2000) and was on the short-lived hospital drama “City of Angels” before becoming the first African-American love interest on “Friends” (beguiling both Joey and Ross).

After The Honeymooners, she’ll be in the movie version of Augusten Burroughs’ best-selling memoir Running With Scissors.

“My work ethic doesn’t allow for idle time,” Union says. “I try to use my summers for something different, which is how I found Neo Ned.”

Union connected to her character by reaching for painful memories of her own: At 19, Union was raped by an intruder robbing the shoe store she worked at in California.

“I had to draw upon it,” she says unflinchingly. “I understood how far the mind can go to protect you from reality. I thought about the points where I felt the most out of control of myself, and when I didn’t want anybody to be around me. It was hard.”

“Gabrielle is tough but has this other side that connects to the slightly wounded and sensitive,” says Neo Ned director Van Fischer.

She now works with community outreach programs in L.A. to help at-risk kids, and has lobbied the California state legislature to secure more funding for rape crisis centers.

“I first talked about it when ‘City of Angels’ was on TV. The show had a story line about a rapist,” she says. “The number of women who came to me and said ‘Me, too’ was alarming and scary. I felt that it was a real chance to talk about something that matters.”

“It’s such a beloved sitcom, and the dynamic works today as it did in the 1950s.

“But it’s one of the few comedies I’ve done where I’m the straight woman, without the punch lines. It’s hard to set up jokes and not get a payoff!”