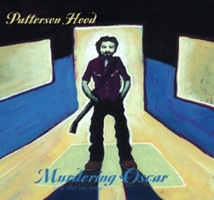 Although it took 15 years for Patterson Hood of Drive-By Truckers to produce Murdering Oscar (And Other Love Songs), it doesn’t sound like Hood evolved past the basics in some of his compositions. While there are certainly moments of deep, slow beauty to be found in some of the slower tracks (mostly in the meandering guitars and ethereal vocals) on Murdering Oscar, the piano that would have really rounded out the sound is left to plink primitively here and there. Also, Hood has no vocal range, which just doesn’t work with croony songs like “Pride of the Yankees.”

Hood is definitely better in the lyrics department than he is at the singing itself, and fans of his previous solo work may be surprised by the intensity of a few songs, but probably won’t leave disappointed. Murdering Oscar is less a show of acoustic intimacy and more of an exploration of country-infused indie rock, and it’s not that it’s a bad album, but in a lot of ways it’s just nothing you haven’t heard before.

Murdering Oscar (And Other Love Songs) is currently available.