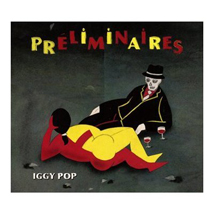 At 62, Iggy Pop is just a few years shy of senior citizenry, though it’s hard to tell when images of the punk godfather reflect a leather-skinned beefcake rather than a typical geriatric. Thirty years after exploding onto the then-newly brewing punk scene as the Stooges frontman, Pop’s age is finally showing.

As with everything, time changes all, and in Pop’s case, change is immediate. Heavily inspired by French novelist Michel Houellebecq’s The Possibility of an Island – the lyrics to “A Machine for Love” directly quote the 2005 novel – Préliminaires ultimately proves Pop is no one trick pony. What originally began as a soundtrack to a documentary based on Houellebecq soon became Pop’s own project independent of any creative ties.

Fans unbeknownst to the album’s culturally stuffed background will be disappointingly surprised by the jazz and blues-tinged tones set in the baritone of Leonard Cohen. And perhaps that was Pop’s overall goal when covering Antônio Carlos Jobim’s bossa nova favorite “How Insensitive” or when singing in French with opener “Les Feuilles Mortes.”

Whether Préliminaires sets the tone for Pop’s future releases or whether his return to punk is imminent remains unknown. What is known, however, are Pop’s open options and his eagerness to explore them, leaving listeners guessing for now.