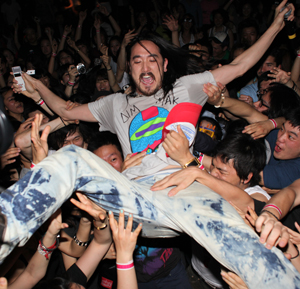 There are two words synonymous with a good time in Los Angeles: Dim Mak. The music brainchild of DJ Steve Aoki Kid Millionaire has – in roughly five years – gone from a nightly gig spinning the latest jams to a massive cash cow and cultural phenomenon. Aoki is a savvy businessman; aside from being young and in the know, he’s managed to diversify his empire to include a record label, event-planning and forthcoming fashion line (with his model-actress sister Devon Aoki; dimmakcollection.com). Aoki has become the Andy Warhol of the 21st century. He and his “factory” have propelled the careers of the band Bloc Party as well as Mark Hunter a.k.a. The Cobrasnake.

Every great party needs an equally outstanding photographer to capture the evening’s deeds for all of posterity. The Cobrasnake sees Aoki’s unique world of hot girls, confident guys and youthful exuberance and records it with just the right air of mystery swirling around it. One look at his work and you can’t help but think, “Who are these people, and how do I get to know them?”

That’s the key to any successful venture. The Cobrasnake agrees.

“I think the greatest thing is just capturing their energy,” he says. “Sometimes [my pictures] are posed; other times it’s just, like, capturing that genuine smile.”

What’s so compelling about the Dim Mak crew is that they seemed to drop out of the air like manna from heaven. Although Aoki has been spinning for years, the heat from his work has spread like wildfire, carrying over to his cohorts.

“I’ve been very lucky in that in the last five years, I’ve been able to work with great brands who have trusted me to cast my own guys and girls,” says Hunter.

That type of autonomy is a rare commodity in today’s world. Some of the best names in the biz – Mario Testino, Michael Buckner, Ellen Von Unwerth – are still relegated to the use of predetermined names and faces. Yet, Hunter has been gifted with a discerning eye that has led to some pretty astonishing discoveries.

In 2005, he plucked model Cory Kennedy from obscurity at a concert in Los Angeles. Their partnership led to groundbreaking work that landed on the pages of Nylon Magazine and also garnered both attention from notable outlets such as the L.A. Times and the New York Times.

Hunter feels that there are some people who carry the “it-factor,” making them insatiable to the public and dynamic figures in pop culture. He breaks down the key ingredient to their popularity.

“I think, like, a free-spirited energy where they’re an unpredictable force,” explains Hunter.

He immediately recognized that feature in his young muse.

“[Cory] had a personal style about her that was so distinct that she was influencing guys and girls around her,” he says.

As for the music industry, Hunter also has a slew of favorites whom he feels are the soundtrack to the Dim Mak legacy.

“I like the new Yeah, Yeah, Yeahs. Fleet Foxes are cool. Everything Steve is putting out with Dim Mak is cool,” he admits.

But at the end of the day, these guys who have taken nightlife and turned it on its ear are still able to get excited about the everyday compliments that come their way.

“I was in L.A. last week,” says Hunter, “and I ran into [“American Idol” runner-up] Adam Lambert, and I asked if I could take his picture. He said, ‘I know you, Cobrasnake. You used to take my pictures three years ago at parties.’”

Being a name on the lips of Hollywood’s hottest up-and-comers is no small feat, particularly when you’re not strapped into a guitar or dazzling the world with your dope jump shot. But somehow, Aoki and Hunter have managed.

The Cobrasnake co-presents Spin the Bottle, a brand-new all ages dance party with special guest DJs like Steve Aoki every Monday at the Roxy. Also, check out Dim Mak Tuesdays at Cinespace. For more information, visit thecobrasnake.com and steveaoki.dimmak.com/blog.