The Stoning of Soraya M.: Inequality of Women in Islamic World 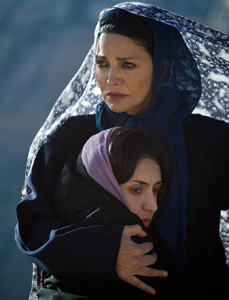 The Stoning of Soraya M., based on French-Iranian journalist Freidoune Sahebjam’s 1994 novel of the same name, is the devastating true story of a woman who was stoned to death in her small Iranian village when she refused to grant her abusive husband a divorce. Played with exquisite grace, depth and nobility by Mozhan Marnò (Traitor), Soraya isn’t a simple victim, she is a sacrificial lamb, a testament to the inequality of women in the Islamic world, the dynamics of mob rule and the villainy intrinsic to tyranny and totalitarianism.

Harrowing, disturbing and overwhelming, Stoning isn’t an easy film to watch but an extraordinary and important one to experience, something writer-director Cyrus Nowrasteh realized almost 15 years ago after he and his co-writer and wife, Betsy Giffen Nowrasteh, read Sahebjam’s novel.

“It really grabbed us on every level and sort of screamed ‘movie’,” he explains with a surprising gentle calm.

Despite their passion for the project, Nowrasteh feared the current political climate and American sentiment toward Iran would make the film too difficult to be financed and produced. But the story haunted him deeply, and five years ago he decided it was a movie that needed to be made.

“It’s a very powerful and important story,” he says with a quiet reverence.

The film follows both Soyara and her aunt, Zahra, played by Academy Award nominee and Iranian expat Shohreh Aghdashloo (House of Sand and Fog, “24”), and begins as Zahra unravels the horrific tale for Sahebjam (James Caviezel) in a desperate and daring act of witness. Despite the film’s weighty subject and profound sadness, Aghdashloo beams when she discusses her role.

“I feel I am fulfilling Zahra’s wish,” she smiles, her husky voice melodic yet gravely, her eyes sparkling. “It’s very close to my heart; shedding light on injustices. Thirty years ago, when I left Iran, I promised I would never stop helping voiceless women and children.”

For decades, Aghdashloo has been a tireless advocate, activist and spokeswoman dedicated to fighting inequality and defending the defenseless in her homeland, yet she hasn’t returned to Iran since the Islamic revolution in 1978. She says she realizes now she’ll never be able to return after having been so publicly outspoken, but she’s proud of the work she’s done, especially of this film.

“When the information is out, the problem will find its own remedy,” she insists. “It’s just for us to put it out and not be afraid of the ramifications or consequences.”

Given the graphic and controversial nature of Stoning, both the director and cast are well aware there could be a backlash.

“I’m prepared for it,” Aghdashloo laughs.

However, they also recognize it’s something that’s already been blown out of proportion.

When asked about the Iranian response and banning of the film, Nowrasteh casually replies, “There was a report in the Guardian in the UK a few months ago where the Iranian government listed some objectionable films and The Stoning of Soraya M. was listed – along with 300 and The Wrestler and a few others,” he chuckles.

However, with or without a backlash, the film still features an appalling, gut-wrenching, brutal and drawn out death, one that is based in horrifying, almost unimaginable reality.

“According to Amnesty International, there are eight women and one man stoned to death within the last year,” Nowrasteh says. “Usually these are morals charges; adultery, prostitution, homosexuality. It’s part of written Islamic penal code.”

“The stoning scene took six days [to film] and that was really hard,” Aghdashloo reveals, her smile fading for the first time. “At one point I was crying and I looked up and I realized; it is really hard to tell the difference between cinema and reality.”

The Stoning of Soraya M. releases in select theaters June 26.