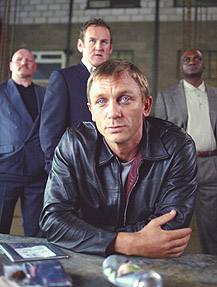 Actor Daniel Craig and director Matthew Vaughn have one big thing in common. For better or worse, they are currently known more for what they may be doing next than for the film they are pushing at the moment. According to imdb.com and several other sources, Vaughn will be directing X-Men 3, due to come out next summer. Craig’s name has been heavily tossed around as the next James Bond. One thing is set in stone though, Vaughn recently directed Craig in the acclaimed British crime drama Layer Cake.

Both men don’t seem to be too phased by their possible future projects. They take it in stride, knowing that a lot can change quickly in Hollywood.

Vaughn should feel a little more comfortable about his next film; he is currently credited as the director of X-Men 3. However, when asked if he is in fact the director, he replies, "In theory. We’re just trying to see if we can get it off the ground. It’s supposed to be filming in August."

At one point, Vaughn was connected to the new Bond film as well.

"I got offered the movie by MGM, but not by the Broccolis," he says. That project did not work out in the end. For his directorial debut, however, he did manage to craft a buzz-worthy crime story starring the man who may be the next Bond.

Layer Cake revolves around a slick, unnamed drug dealer (Craig) who decides to retire from his dangerous profession. Before he fades into the shadows, though, he must perform a couple final tasks for the bosses. Naturally, the schemes do not go according to plan, and XXXX – as he is credited in the cast list – gets tangled up in power struggles, some romance and a lot more violence than he desired.

Craig says he was attracted to the part because of the "brilliant" script and the complexities of the character inside this drug world.

"You see his struggle with it, how much it pains him, but also how much of a fool he is, to think he could never get his hands dirty."

His character is also different in that he is a more subtle criminal, right down to his anonymity.

"Usually in movies," he says, "you see the flashy car, the gold, and that’s a criminal. But the most successful criminals don’t advertise it."

One way Craig’s character tries to keep his trade undercover is his disuse of violence. As a result, the film does not play like a typical crime drama – it does not have huge gun battles, long car chases or over-the-top action sequences.

Craig believes that Vaughn was successful overall in his portrayal of the violence.

"I think we glamorized it a bit," Craig says. "But we succeeded in scaring people. When guns are fired, people jump. I think that’s good, in a way."

Vaughn says he wasn’t trying to revolutionize the genre; he was just trying to be creative in unfolding the tale

"It’s not hard to make the criminal trade exciting," he says. "A new story is almost impossible now. I tried to make it fresher, not new."

According to Vaughn, he’s also looking to freshen up the X-Men series if he takes the helm of the franchise later this summer.

"The X-Men’s are very much movies from the ’90s. It’s time to toughen them up a bit," he says, before dropping some hints about the look of the film. "I hate CGI," he admits. "At times you have to use it. With this X-Men, we’re going to do as much on camera as you can."

Like Craig’s acceptance of the Bond issue, Vaughn doesn’t seem to mind all the X-Men chatter. "If it makes people watch this film, so be it."

Layer Cake releases in theaters May 13.