Don't Watch With Your Parents In the Room: “Poor Paul” Season Two 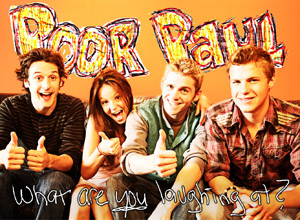 Looking back at the long history of film that began over a hundred years ago, the Internet is still very new. It may seem as though we have had this medium for ages, but in the grand scope of things it is considered new. There is a fresh generation of filmmakers out there who are now using this medium to get their independent art out there.

This is not to say the art is amateur. As a matter of fact, the Internet has no limits, and allows you to go father than any theater would. You can do or say anything, no MPAA to boss you around. This is exemplified through the characters of “Poor Paul” as they swear their way through situations that you would never want to be caught in ... especially by your parents.

Having never watched a Web series, when I came across this show it was a completely new idea to me. This was the first thing I had seen on my computer that was not an amateur YouTube video.

I was also not expecting the show to be as hilarious as it was. Zack Bennett, who plays the title role, brings an awkward, gawky feeling to his character, who I can honestly say mirrored me a year-or-so ago.

The main thing I love about this show is that it does not fall to slapstick comedy. It uses everyday dialogue like I could easily converse in with my friends. These are real characters; the show’s writers do not need to step over the line in order to deliver the laughs.

This show is great, and I highly recommend that you check it out. This summer, if you don’t feel like paying $15 to go see a movie, just power up your computer and take a gander at “Poor Paul.” Just don’t have your parents in the room.