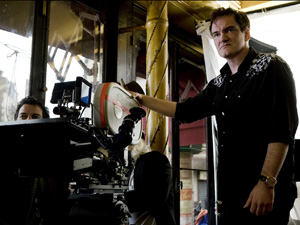 I recently had the privilege of attending an advance screening of Inglourious Basterds, the new film from Quentin Tarantino. As a filmmaker, Tarantino’s body of work is immeasurably influential on me and has imbued me with a bit of a bias.

However, when I went into this film I made the effort to view it objectively and put my love of his previous projects aside so that I could view it without my bias. As it turned out it really didn’t matter because I loved it anyway.

My first feeling is that this film will probably divide audiences and get mixed reactions from a lot of people, and whether you hate it or love it, everyone will definitely agree that it’s very unique against all the garbage being released these days. More than ever, movie audiences are bombarded with sequels, remakes and adaptations, leaving the field of original filmmaking to those like Tarantino, who have what it takes to try and deliver an original.

And boy, does he deliver. Not only did the film defy my expectations based on the trailers I had seen, but also was a damn good film to boot.

My only hope is that the movie-going public hasn’t been saturated with so much formulaic filmmaking that they’ll be able to embrace a film that thumbs its nose at the conventional way of telling a story. Everything in this film was great, and I commend Tarantino for making the film he wanted to make. And of course, all you Tarantino haters can die a thousand deaths.

This press release got me to thinking about something much bigger than movies. Reese Witherspoon is developing and attached to star in a project titled Pharm Girl. Described as an “aspirational comedy,” the film is apparently about a woman who works her way through the pharmaceutical business and gets a glimpse at what goes on behind the iron curtain.

I’m not exactly sure whether or not this film is going to carry any kind of anti-pharmaceutical message, but I’m willing to bet that it’s not going to be pro-pharmaceutical. I don’t find anything funny about the pharmaceutical industry, and I hope this project takes this opportunity to disguise some forward critical thinking with comedy and satire.

But when I read this, it got me thinking about something I heard Michael Moore say on a podcast recently. First off, say what you want about Moore, the man has more courage, is more patriotic and cares way more about the lives of his fellow people than everyone who punches a clock at the Fox News Corporation combined.

What I hear a lot of people say about him is that he’s biased. You know what? Good!

Anyway, Moore was asked why the corporations that distribute his films are among the people whom he speaks out against. His response was that the reason these companies are comfortable distributing documentaries and films that criticize the worst aspects of capitalism is because they believe that even after people are exposed to this stuff they still won’t do anything. They’ll go right along with their lives and eat at McDonald’s.

That’s the exact reason why you could get away with making a film about the negative aspects of the pharmaceutical business. Because they know that a lot of people will leave the theater after seeing this film and go pick up their prescription for Xanax.

Unfortunately, I think that’s true, and it says a lot about the disconnection and overall apathy of the American people. If people took to the streets and rioted like they do in other countries when the government or big businesses do something super shady, we would not see as many films and documentaries that criticize and make jokes about the system. Hopefully this will eventually change, but until then I welcome more filmmakers bold enough to make films about things that matter the most.