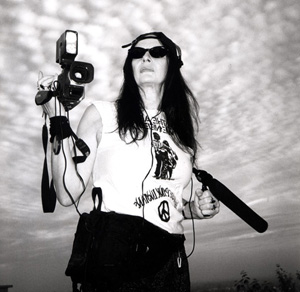 Penelope Spheeris is one hell of a woman. After growing up traveling the country with her Greek immigrant father’s circus, Spheeris ended up in Los Angeles, going to UCLA and engulfing herself in the city’s late-’60s music scene. She worked as a film editor and cinematographer, formed her own music video production company (the first of its kind) and, in 1979, produced and directed the seminal punk documentary, The Decline of Western Civilization.

Through her long and impressive resume of both commercially-viable and underground-oriented films – that includes The Little Rascals, Wayne’s World and an Ozzfest documentary, among others – Spheeris has remained a strong female presence in the industry.

And although her career has since segued into a more mainstream arena, Spheeris’ most intriguing works lay somewhere in the ’80s with her exploration of troubled youth through the merging of music, culture and film. On Friday night, Spheeris and her music-addled films will be honored during the Third Annual Greek Film Festival (June 25-28) with a tribute screening of her first fiction film, 1984’s Suburbia.

With a cast of musicians – not actors – that places a young Flea (bass player for Red Hot Chili Peppers) alongside Chris Pedersen (whom Spheeris met at a concert), Suburbia follows a group of punks who run away from home and end up as squatters in abandoned suburban tract homes. As a more authentic, less exaggerated precursor to SLC Punk!, Suburbia features the dichotic nature of the punk lifestyle juxtaposing live footage of bands like the Vandals and T.S.O.L. with the sometimes harsh realities associated with living outside of society’s expectations.

Introduced by an 11 minute short about Spheeris’ mother – and, thus, her own troubled youth – and followed by a panel discussion with Spheeris and others associated with the film, the “Rocking N’ Reeling” tribute event (named for her aforementioned music video company) is bound to be as wacky, off-kilter and punk rock as the filmmaker, herself. 7 p.m. $20, $15 online and for students.