Move It!: Video Games Becoming Part of the Solution 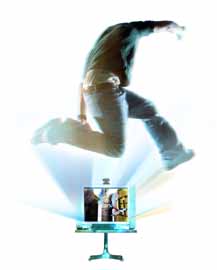 When he’s not outside, riding his bike, Mitchell Nazaroff sometimes likes to burn some energy indoors.

Facing the TV and a palm-size video camera that captures his every move, the 9-year-old bends his knees slightly, plants his feet wide apart, hunches his shoulders and places his arms in front of his chest in a classic martial-arts defensive stance.

As the animated fighters jump from balconies on the screen, Mitchell jabs swiftly into the air to knock them down. He executes a sharp kick with his left leg and bounces an opponent out of the screen. Every now and then, he shuffles left and right like a boxer. For bonus points, he breaks wooden boards left and right. And when it’s all over in less than 10 minutes, Mitchell reaches a new personal record of 43,200 points, beating everyone else’s highest score in his household in Irvine, Calif. He breaks into a wide grin, clearly pleased with himself. Mitchell is playing "Kung Foo," one of the eight minigames featured in the video game called "Eyetoy: Play."

It’s part of fitness or exer-gaming, a growing category of video games and equipment designed to get gamers off the couch and moving.

The new tools are one way to counter the long-standing negative relationship between video games and a sedentary lifestyle and excess-weight problems among kids and adults, health and fitness researchers say.

Five years ago, physical active video games might have been an oxymoronic concept. But after highly successful "Dance Dance Revolution" (DDR) landed in living rooms in 1991, the video-game industry has been toying with various fitness-related formats.

Here’s how the newer games and equipment dispense with conventional joysticks and controllers:

In the first set of Eyetoy games, "Play and Groove," a player literally becomes part of the game. A separate camera captures a player’s image and movements and shows them on the TV monitor. A player uses his hands, arms, head and torso to hit virtual objects or fend off animated opponents in games such as "Kung Foo," and "Goal Attack," or to dance to music. Soon to be released: "Eyetoy: Kinetic," which promises to provide a full-body cardio workout with movements borrowed from tae kwon do, kickboxing, tai chi and yoga. Cost, including camera: $50.

"Eyetoy: Antigrav" enables one or more players to choose from a set of characters who ride a hoverboard – like the one shown in the movie Back to the Future Part II. A camera captures the players’ movements, but not their faces and bodies on the screen. Instead, players become their chosen character and lend their movements to animate it on the hoverboard. Surfers, skateboarders and snowboarders may find the balancing movements familiar. Cost: $50.

"The Cateye GameBike" and the "Reebok CyberRider" hook up to a game console such as PlayStation 2 or XBox, so that a player can ride a bike and play games that involve driving or riding vehicles. Cost: Up to $1,200.

Powergrid Fitness touts its "Kilowatt Sport" as a life-size game controller that gives a player an isometric workout, where you contract your muscles to make them tense. To play games such as "Gran Turismo 3," a player pulls and pushes against the shoulder-height joystick that provides resistance. Cost: Up to $1,200.

Yourself!Fitness features a virtual personal trainer who designs a workout tailored to the player’s fitness level and goals. It’s less like a traditional videogame and more like a fitness video, except that the player has a different workout routine each time she plays. Cost: $35.

Some children’s health researchers say the games and equipment are a welcome improvement, at least in the short term.

"This new generation of games and video-game input devices that promote movement as a part of gaming is a very positive step from what some call ‘the sedentary entertainment industry,’" said Dr. Thomas N. Robinson, associate professor of medicine at Stanford University and director for the Center for Healthy Weight at Lucile Packard Children’s Hospital in Palo Alto. Robinson has conducted studies that showed a relationship between watching TV and playing video games and children’s weight.

"I have often wondered what took them so long to figure it out," Robinson said. "Many of us in the obesity research field have been talking about this possibility for many years. It is great to see the engineers and game designers starting to come out with more and more ways to build physical activity into their games."

"It’s an excellent idea that is well behind its time," said William Beam, associate professor of kinesiology at California State University, Fullerton. "If video-game makers continue to build physical activity into their games, they may open up a whole new market."

WHERE DOES IT FIT?

The challenge for the video-game industry is to keep the games and equipment from becoming passing novelties.

"There is no question that products like these can be highly motivating for short periods of time," Robinson said. "We see kids working up a great sweat while playing ‘Dance Dance Revolution,’ for example. But whether a substantial number of kids (or adults) will stick with them over time is still unknown, and an important question for research on these types of products.

"People will play them as long as they feel they are being challenged and are improving their skills and achievements," Robinson said.

Robinson pointed out that the games have some minuses. One is a cost that may be prohibitive for low-income families.

He added: "They send a message that technology and costly equipment is required to stay fit, many of them are played alone and limit social interaction, and they may displace a lot of easier, cheaper and more social forms of physical activity, like playing outside after school and on weekends, joining a sports team or class, or even taking a walk or riding a bike."

Nazaroff said that active video games should never be a substitute for active playing outside. And just because a video game is active doesn’t mean kids should play it without limits. She limits Mitchell to three hours of gaming a week.

Researchers and video-game makers agreed that active video games aren’t the panacea that will make gamers fit. But instead of contributing to the obesity dilemma, active games and equipment can be part of the solution as long as they supplement other forms of physical activity.