There for Tomorrow: Here to Stay 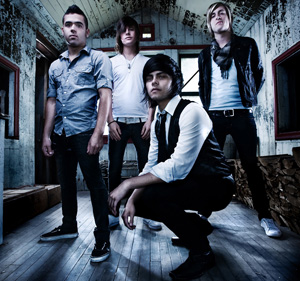 How many times have we heard that before? Bands like that are a dime a dozen these days, right?

“Our lyrics are hopeful and bring forth problems from our everyday lives that can relate to everybody,” says Kamrada.

A lot of bands say that, but precious few of them actually deliver on this mentality in their music. There for Tomorrow are used to getting lumped in with other bands in their genre who are slightly less than genuine in their music. And if there’s one thing the foursome like doing in response, it’s proving the people who would associate them with those acts wrong.

Considering they’re barely over the age of legal adulthood, Kamrada, guitarist Christian Climer, bassist Jay Enriquez and vocalist Maika Maile are well on their way to breaking away from their contemporaries. But they’ve also been doing this together a lot longer than some of their older touring mates.

“We’ve dedicated the last six years of our lives to getting better as musicians. Most bands that are 19 haven’t been with each other as long as we’ve been together,” says Kamrada.

From the first lines of their debut full length, A Little Faster, their craftsmanship is on full display. But technical skill is only a small part of the equation, with the band’s greatest strength being their passion for their craft.

“We put a lot of emotion into our music,” says Kamrada. “I love what I do every night, it’s not just me trying to make money.”

Maile adds, “There’s a lot of bullshit in music today, but hopefully we can rise out of that. A lot of bands put out a single and that’s all they’re known for, but some bands find a loyal fan base because of their whole album and that’s what I want, a good album from front to back.”

As big as Maile’s voice is on recordings, it’s this commitment to having longevity and maintaining artistic integrity that speaks louder than anything.

A Little Faster is currently available. There for Tomorrow will perform June 26, 28 and Aug. 23 at Warped Tour Pomona, Ventura and Carson. For more information, visit myspace.com/therefortomorrow.