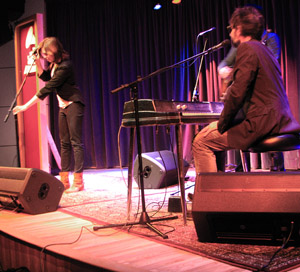 On June 8 the Grammy Museum launched a program series dubbed the Drop, featuring musicians who perform and discuss songs from their newest albums. The third installment of the Drop showcased Mandy Moore and her latest album, Amanda Leigh, in the museum’s intimate Sound Stage.

Amanda Leigh was co-written by Moore and Mike Viola, who became the producer and co-conspirator of the album. The pair took on instrumental inspiration from their combined love of music and artistic influences such as Joni Mitchell and Paul McCartney’s Ram. Recorded in Ducky Carlisle’s basement studio, Carlisle’s collection of assorted vintage equipment was utilized throughout the album.

Robert Santelli, Executive Director of the Grammy Museum, opened up the evening with a sit-down conversation with Moore. Fans discovered private details about her journey making Amanda Leigh – such as being left in the basement of a friend’s house for hours on end.

Self-deprecating, honest and funny to boot, Moore’s latest venture into music is a far departure from the bubblegum pop of her teens. The newly married Moore features beautiful folk music that is dreamy, peaceful and is centered on her current stage in life.