Ben Matsuya: A Talk with the ImagiNations Finalist 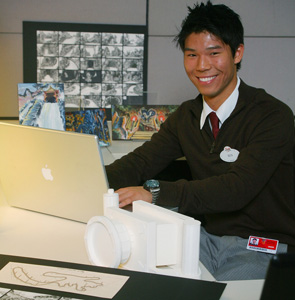 Ben Matsuya is a member of the CSUF team, finalists in the ImagiNations Design Competition
(Credit: Gary Krueger)

“As long as I can remember, I’ve always drawn comic strips,” says Ben Matsuya. “I just kept going and figured it was the best thing I was good at. I love telling stories, especially through images. I love the challenge of conveying a scene in the most dynamic way possible.”

You may not know his name yet, but this Cal State Fullerton junior was one of a team of three from the SoCal university to participate as a finalist in this year’s ImagiNations Design Competition, sponsored by Walt Disney Imagineering, which helps students pursue careers in digital arts, engineering, and next-generation interactivity.

Participants were asked to design an attraction, land, restaurant, merchandise location, hotel or new experience that would fit in at existing Disney theme parks or resorts, but with the caveat that they would never be made. The CSUF team’s winning entry is an adventure ride that combines environmental awareness, mythical monsters and a Buzz Lightyear-esque inter-activity aimed at providing quick-paced thrills for a tech-savvy generation.

“Our group had a very good dynamic,” Matsuya says of working with teammates Calixto Ortiz and Natalie Berger. “We liked to keep things loose and fun, perhaps a little too much at times but it all worked out. We are all artists so we think a little differently than more technically-minded people.”

The winning teams, which represent CSUF, Rowan University and North Carolina State University, were given the opportunity to visit the Imagineering offices in Glendale for two weeks (June 2-11) to get a feel for the real Disney experience. The Walt Disney Company has consistently been named one of BusinessWeek’s Best Places to Launch a Career, and Matsuya wholeheartedly concurs.

“There are so many different opportunities that Disney offers that it really is a spring board to almost any career. And the Disney name is so respected and admired in the world that just being associated with this company can benefit you in the future.”

And what’s next for Matsuya?

“I’m hoping that an intern opportunity opens up for me at Disney. Apart from that I hope to start my own comic series and make music.”