Fifteen Bands Not to Miss at Warped Tour 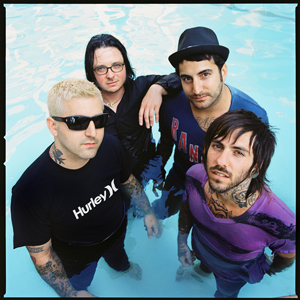 Another year, another summer, another Warped tour just around the bend, such are the great constants of life. As the punk rock summer camp celebrates its quinceañera, the symbolic number of bands I get to pick as the “must see” ones grows as well. And despite how people will always bitch about the current year’s lineup being not as good as the previous year’s, there are still more worthwhile undiscovered bands playing this year than I could ever fit in a Top 15 list, but try to check these kids off your to-do list first.

Lots of bands on Warped do the whole melodic danceable pop thing, that’s certainly nothing new, but I promise none of those other bands are as infectiously catchy as TFT.

These guys just never really get the attention they deserve. They’ll have one hit single off an album, for which the music video gets minor airplay, only to end up back in obscurity until the next album. So please, do your part, keep this band relevant because they actually have something real to say and package it very nicely in a number of catchy songs that aren’t singles.

You know that whole melodic danceable pop thing I mentioned a few lines up? Well, I’d be quite remiss in my duties if I didn’t include the genres currently reigning kings, wouldn’t I? (Aug. 23 only)

AMP frontman Jason Evigan grew up in the same social circles, so I’ve watched him mature as a musician and artist – just as I did as a writer – since we were both teenagers. Some seven years now after first seeing him play, it makes me very stoked to see Evigan’s melodic, piano-backed crooning finally start to get the attention it deserves. (June 28 only)

It’s Bad Religion, people. They’ve been doing this punk rock thing since before most of the bands on this list were even born. Suffice to say, they know how to do it right.

I already know whom you’ll compare this Florida fivesome to, but imagine if my favorite girl-fronted dance-pop band were a little more hard rock with a little more orchestral influence.

I’ll always have a place in my heart for the members of this band from their days in Over It, and even though their dance-y Runner Runner work is a drastic shift away from their pop punk roots, these guys work their asses off and have earned my support of this endeavor because of it. (Aug. 23 only)

If you’re not charmed by the Frampton sisters’ brand of feel-good emo pop and aren’t entirely smitten with Meg and/or Dia by the end of their set, there’s just no hope for you.

The arena venues that Saosin played in during their Taste of Chaos stint a few years back didn’t stand a chance at containing frontman Cove Reber’s powerhouse vocals. And considering the rest of this band likewise don’t know how to do anything other than big and epic, the fairgrounds-sized venues of Warped will have their work cut out for them as well.

I don’t know if I’ve ever seen another band attack every stage they’ve played with such perfectly choreographed reckless abandon. True to the stylistic motifs of their last album, each of the band members shred on their respective instruments like wild animals attacking prey, but with a technical intricacy and stage presence like they were the foremost opera company of our generation. One thing the Michigan natives always deliver is giving every audience the proverbial experience at their shows. (Aug. 23 only)

Some of the coolest guys around, these Warped veterans never fail to put on a solid show. Frontman Anthony Raneri’s signature theatrical, gritty-melodic voice always sounds perfectly true to the band’s albums and his band mates match his ability to translate record to stage, note for note.

P.O.S. is one of precious few hip-hop artists who has the unique ability to be 100 percent at home on Warped stages, even when scheduled to play in between acts like As I Lay Dying and Every Time I Die. Even though his style may be the polar opposite of some of his harder or poppier touring mates this year, P.O.S. is as real as it gets. When he takes stage, you know you’re going to get a story, and you know he’s going to make his point clear in the process of telling it.

The fact that my favorite Canadian Warped band has three vocalists is understandably a bit off-putting for some listeners, and not unfairly so. The most visible bands who have more than one tend to also be the most awful ones, but if ever there were a band who could change public opinion on the subject, it would be Alexisonfire. With all three vocalists working together cohesively, the band makes their sound exponentially bigger, combining with all their band mates for some of the most epic sounding rock Warped has to offer.

Holy archaic monarchy system, these dudes can thrash. If listening to a Gallows album is already the aural equivalent of being a barroom (or pub, I guess, if you really want to be authentic) brawl, seeing them play live is on par with three rounds in an octagon with Fedor Emelianenko. In both cases, you likely won’t come home with all your teeth, but you’ll still brag to your friends about losing them in a totally rock ’n’ roll way. And in case you haven’t heard (or read my review a few weeks ago, but I know you all did), the U.K. natives’ new album absolutely kills and is one of the best hard rock albums to come out thus far this year.

There just aren’t words to adequately describe how important this band is in demonstrating the potential of what bands can accomplish with their music. Having evolved from a local Orange County hardcore act into a progressive, intellectually and emotionally challenging art rock band who haven’t lost sight of their hard rocking roots, these guys are the definitive renaissance men of Warped. Every album the foursome have put out has significantly upped their game from the one before, and even for how ambitious the four-part Alchemy Index album was, their upcoming work promises to do the same. So to the one inevitable douchebag who will dare to say, “I wish they’d just play ‘Deadbolt’ already,” please, die in a fire, as the kids on the Internet like to say these days.