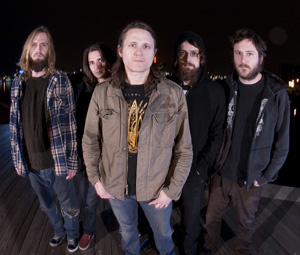 With metal being targeted as the new pop rock, a slew of fast and dark bands are heading your way. But with the last breath of record labels trying to find the latest and strongest acts, only one is taking the scene by storm – and the catch is they’ve been around for 14 years.

Originating in Washington, D.C., Darkest Hour started off as a straight ahead metal band. Fast riffs, brutal vocals and tight drums. But over the years they have developed their sound to show drastic range in melody and even more intensity in their heavy sound.

“I started out listening to bands like Van Halen and Pantera,” comments lead guitarist Mike Schleibaum. “As a guitar player, that was the sound that I identified with. But with these guys, I’ve had a chance to really expand my sound.”

The band has always been known for its ability to bring out the metal in its most extreme fashion, but complex musical arrangements and songs pepper the latest album.

“We wanted to make this album heavier and faster, but also show range and be able to give fans a fresh sound,” says singer John Henry. “We are finally done with our old label and can move forward with Victory Records.”

“The goal is to give fans something new,” he adds. “This is our chance to start fresh, and the album has to represent that.”

Starting fresh is common theme in bands these days that are taking full advantage of everything available to them. Using online tools that are out there is the biggest point to make with Darkest Hour.

Not only are they constantly updating their MySpace page with videos from the road and hilarious stunts, but they are reaching for other means to get music to the fans. “Guitar Hero 5,” coming Sept. 1, 2009, will include a track from the band.

“I can’t wait to play the game!” says an excited Schleibaum. “It’s going to be so awesome to try and play my own songs. I mean the game isn’t real music playing, but I know it’s going to be close. I’m planning on throwing a huge party when it comes out. Getting a chance to have my friends and fans play our stuff in a game is awesome.”

But it’s not all fun and games for the guys.

“Playing in a metal band is tough – really tough,” relays Schleibaum. “It’s a dark world, and you’re on the road all the time so you have to love what you do. Time and time again I hear bands talking about the money, but it’s not about the cash. Sure, I’d love to be making millions on the road, but that’s not real. If you do this because you’re after fame and not because you love the music you play, you will never make it.”

Understanding how important their current place in music is, the band is very appreciative because they haven’t compromised to get where they are. Darkest Hour will be one of the featured acts on one of the heaviest tours of the year, Summer Slaughter, which is headlined by Suffocation, a legend in metal.

“Getting to play with bands like Suffocation and the others is great. These guys are legends, and getting exposed to their fans is more than huge,” says Schleibaum.

The band will be promoting their latest album, The Eternal Return, so they can bring the new material to all the fans on this brutal tour.

“I feel this is the best record we’ve ever done,” boasts Schleibaum.

The Eternal Return is currently available. Darkest Hour will perform June 28 at the Grove, Anaheim and June 30 at the House of Blues Sunset Strip. For more information, visit darkesthour.cc.