Katie Chonacas: A Girl with Big Heart and Hair 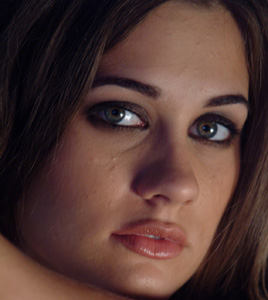 Katie Chonacas is a multi-talented, vivacious young lady of abundant character and compassion. After leaving her home and big Greek family in Detroit, Mich., to pursue a career in music, film and the arts, 15 family members followed her lead and moved out west as well.

Quite the trendsetter, Chonacas is now a developing artist with Universal Republic, has appeared in 50 Cent’s video for “Burn Me” (and went on tour with him) and is set to produce Jekyll and Hyde starring Forest Whitaker and 50 Cent later this year.

With the guidance of her vocal coach, legend Doc Holliday, whose client list includes Britney Spears and the Jonas Brothers, Chonacas’ fan base is blossoming in Los Angeles, New York and Europe.

Quite an ambitious multitasker, she has an art show premiering June 29, running through the summer, displaying eight pieces of her abstract art and 3D collages at Groundwork coffee shop on Sunset and Cahuenga Boulevards in Hollywood.

She will soon appear in the feature film, Streets of Blood (July 28), alongside Sharon Stone, Val Kilmer and 50 Cent, as Cecilia, a “teenage cracked-out whore.” When Chonacas read the script, she immediately recognized this role as “an amazing challenge as an actor.”

“Even the intensity of my character’s eyes will really capture the audience!” she says.

Chonacas is a firm believer in giving back, and one of her ultimate goals is to donate her long locks of hair (a family trait) to kids with leukemia. She hopes to book a national hair campaign, in conjunction with Pantene, encouraging people to contribute their hair to this worthy cause.

“This would be my gift to the world,” she says. “I feel really blessed, and with strength, love, family, faith and a positive mental attitude, I can do what I do!”