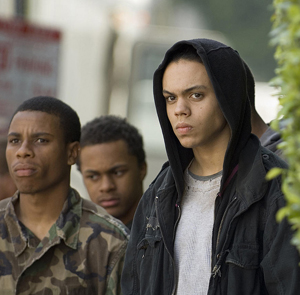 He’s the cute, fresh-faced heartthrob who wowed audiences in the movie ATL and soared to media limelight as a troubled teen in Life Support. The ultimate pullout poster boy, 20-year-old Evan Ross is a young man on the edge of stardom, and in his latest role he’s shifting into high gear as an evil gangster with a vengeance, proving he’s a force to be reckoned with.

“In the movie I play a street thug called Romeo,” says Ross. “He’s not a stereotypical gangster. He’s scary but sensitive. He’s on the verge of being so angry and he’s very soft-spoken and is easily bothered but it’s just nerves that are going on and he’s struggling within himself.”

The movie he’s referring to is the shocking, violent drama called Life Is Hot in Cracktown – a disturbing and harrowing series of stories about a neighborhood under siege from crack cocaine. Ross as Romeo is a brutal, evil hooligan with a chip on his shoulder. Upset over the murder of his younger brother, and feeling partially responsible, he terrorizes anyone who dares to cross his path. It’s a role Ross says he was excited to play.

“I have never done anything like this before,” he continues. “I like the story and I think it’s important to show realities whether you agree with it or not, and for me it was a learning experience. People don’t get the chance to play certain characters in their career and I am glad I was able to have a chance to go someplace like this. I want to play the good characters, the bad characters, the conflicting characters. I want to be able to play all this different stuff.”

Written and directed by Buddy Giovinazzo and best described as Crash meets Clockers, Life Is Hot in Cracktown stars Kerry Washington, Vondie Curtis-Hall, Lara Flynn Boyle and RZA. Based on the book of the same name, it’s a project Giovinazzo has been struggling to make for over 10 years.

“I wrote this book in 1992, had it published in 1993 and from 1994 to about a year ago I have been trying to make this film,” claims Giovinazzo, who cities the film’s intensity as a partial reason for the constant rejection.

“I don’t think films always have to be entertaining. I think there’s room in the marketplace for films that are provocative. Films that make you think. The truth isn’t always pretty. These places are there and these characters exist.”

With intense and graphically portrayed scenes, it paints a realistic and disturbing picture of a world filled with drug addicts, pimps, prostitutes, transsexuals and low-life criminals all caught in the deadly orbit of crack. Despite an extremely convincing role, Ross, who is the son of legendary entertainer Diana Ross and Arne Naess Jr., has some reservations about sharing his latest project with his famous mother.

“I like my mum to see all my films and I would love her to see this, but I know my mum and it’s hard for me to have her see it, especially with the way the film starts,” says Ross, who shares a very close relationship with the musical legend.

With several more projects slated for release this year, including a movie with Hilary Duff and Ellen Burstyn, and an album in the works, Ross is on the verge of becoming one of the hottest young stars in Hollywood.

Life Is Hot in Cracktown releases in select theaters June 26.