Daytona Beach: (A lot!) More Than a Beach 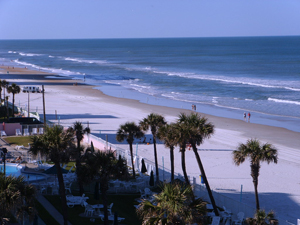 Daytona Beach is one of those curious destinations where two very different worlds seem to collide. The beach itself (where you can actually drive on the sand in places) has an almost magnetic appeal for those who like to relax with the sun and surf, while not far away the Daytona International Speedway offers just the opposite; a loud, gasoline-powered high-speed thrill-a-minute in the form of the Daytona 500.

There’s a connection between the two that is not well known outside the area. It was right here at the seaside Streamline Inn Motel where a group of businessmen and racing enthusiasts met on a December evening in 1947 and formed an organization they dubbed the National Association for Stock Car Automobile Racing, better known today simply as NASCAR.

Daytona Beach is rightfully proud of its racing heritage and one of the city’s main attractions, even on non-race days, is the Daytona 500 Experience, located at the speedway (1801 W. International Speedway Blvd.). The Daytona 500 Experience is filled with all kinds of racing memorabilia, including actual racecars, but the real fun there is in the “hands-on” displays.

With a few friends you can participate in the pit crew tire-changing experience. Then there’s Acceleration Alley where you can hop into a racecar and strap in to compete in a simulated race. At the end of the simulation you get to collect a printout with all the details of your drive like your top speed and, of course, what position you came in. The grand finale of an afternoon at the Daytona 500 Experience is a trolley ride out onto the infield of the track where you’ll tour pit road and victory lane as well as all the behind-the-scenes stuff that makes everything work.

Other things go fast in Daytona Beach, too, some of which are thanks to Bruce Rossmeyer’s Harley Davidson (1637 N. U.S. Hwy. 1, Ormond Beach). Rossmeyer’s is the largest Harley dealership in the world, and their jaw-dropping multi-storey showroom is packed with bikes of every model and vintage. You’ll even find Elvis Presley at Rossmeyer’s – the King is outside the dealer’s front door, immortalized in bronze aboard his favorite Harley.

And believe it or not there are some speedy things in Daytona Beach that don’t rely on wheels. The Daytona Beach Kennel Club & Poker Room (960 S. Williamson Blvd.) is relatively new to the area. Here you can puff a stogie while you play poker until midnight or plop down a wager on greyhounds.

Other fun attractions in the area are the Ponce de Leon Inlet Lighthouse (4931 South Peninsula Drive) where you can take a dizzying 203-step hike up its spiral staircase. The tower is a working lighthouse and is Florida’s tallest.

The Museum of Arts and Sciences (352 S. Nova Rd.) has a huge and varied collection, including vintage train cars and an in-depth display of Coca-Cola memorabilia, while the Fountain of Youth ecotour takes you on an hour-long boat ride into the Woodruff National Wildlife Refuge where you’ll see lots of animals, including gators.

And there’s always that glorious beach. When you’re tired of sunbathing (not likely!) just hit the boardwalk and pick a spot to eat, drink or kick up your heels. Whatever you choose, don’t worry if you miss something – this city known for racing doesn’t mind if you come back for another lap.

NASCAR Coke Zero 400 takes place at the Daytona International Speedway on the Fourth of July. For more information, visit daytonabeach.com.