Leaving The Past Behind: Young Vietnam Strides Into Future

By Michael A. Lev 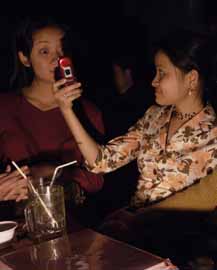 HANOI – Do Sao Mai is 21 years old and an international studies major at college who learned to speak flawless English because "when I was 14, I loved the Backstreet Boys."

She is also given to analyzing other young Vietnamese, like her classmate Chi Mai, another fluent English-speaker whose career ambition is to help the poor, "because I’m an Aries," a fact she learned from surfing the Internet.

These modern women – two of the best and brightest of their generation _ see great promise in Vietnam, which will someday be as rich as Thailand, Chi hopes, though "not overly Westernized."

Fellow student Do agrees, noting that Hanoi already has its share of "nasty" bars and young lovers who spurn conservative tradition and take their motorbikes to the lake to kiss.

"Vietnam used to be closed, and once it opened everything has come in, and there has been no time to choose," she explained.

Economic development, Western influence and a rush into the future are the trends that define Vietnam today.

What does not dominate is the past.

April 30 marked the 30th anniversary of what Americans remember as the fall of Saigon and the final, bitter conclusion to the Vietnam War. On that day in 1975, the last American helicopters evacuated the last Americans from the roof of the U.S. Embassy in a place that would be renamed Ho Chi Minh City by the victorious North.

In Vietnam, April 30 was commemorated as Southern Liberation Day, marking the end to what is known here as the "American War." There were government celebrations, but no obsessive reflecting on history because – as Vietnamese keep reminding Americans – the war is long over.

"It happened. It’s still there. But we are going to move forward," Do said.

The Vietnamese are into their second decade of transformation from poverty and communism to entrepreneurship and what they hope will be prosperity. The streets of Hanoi and Ho Chi Minh City have long since been overrun by motorbikes. Private enterprises account for more than 50 percent of business activity and represent the engine of growth for an economy that is expanding by more than 7 percent annually.

In Ho Chi Minh City, the frenetic pace of life has the feel of the next China. This is no brain-dead communist throwback, and it is certainly not the closed-off Vietnam of the 1970s and 1980s.

Even early on a typical Sunday morning along Le Duan Boulevard in Ho Chi Minh City, which is less conservative than Hanoi, the level of activity rivals New Orleans during Mardi Gras. University revelers at an all-night outdoor karaoke party had finally gone to bed when a enormous youth sports day parade marched by on the way to the grounds of the Reunification Palace, the former South Vietnamese government seat.

To the Vietnamese, this kind of energy and enthusiasm seems natural, and it makes sense for what is a country of young people. Vietnam underwent a baby boom after 1975, and nearly 60 percent of its current population was born after the war.

For Americans, however, it can still seem shocking to think of Vietnam as a country, not a war.

Klaus Rohland, the World Bank’s representative in Hanoi, said that too many Americans continue to see Vietnam in their minds in grainy black-and-white images, as if replaying old television war footage.

"Even the idea that people in Vietnam could be happy and smiling is beyond them," he said.

"The Vietnamese," said former U.S. Ambassador to Vietnam Ray Burghardt, "could teach us a lot about how to focus on the present and future."

You could say the Vietnamese appear to have been less wounded psychologically by the war and are more willing to put it aside because they won, but it is not that simple. Vietnam has been weighed down and held back by its own psychic baggage.

Having defeated the French and then the Americans under the mantle of communism, and having been supported by the Soviet Union after victory came in 1975, Vietnam’s authoritarian government only reluctantly joined the rush to global capitalism that defined the 1990s, fearing a loss of political control if it opened up too quickly.

After the U.S. dropped its trade embargo and established diplomatic relations with Vietnam in 1995, there was a flurry of foreign investment. But that fizzled when it became apparent the country really wasn’t serious about doi moi, the Vietnamese phrase for economic restructuring.

Observers say it has only been in the last two years or so that Vietnam has come to accept that it must abandon old thinking and get serious about becoming a full-fledged member of the international community. This means unshackling the economy from communist-era regulations, joining the World Trade Organization – which it hopes to do within a year – and developing better political ties with the rest of the world.

The government seems to understand that if it doesn’t pursue an agenda of global ties then Vietnam will be left behind. But when Vietnamese say this, what they really fear is something more dire: being swallowed up economically and politically by China.

Vietnam is a country of 82 million people located just to the south of its behemoth archrival. For more than 1,000 years, as any Vietnamese historian will tell you, China has been Vietnam’s rival and nemesis, and probably never in that span has China appeared simultaneously so peaceful and so threatening as it does today.

If there are any Americans who might assume Vietnam remains obsessed with the United States, they should meet someone like 35-year-old Nguyen Xuan Bac of Ho Chi Minh City. He will explain the real focus of attention and anxiety: "The Chinese."

Nguyen, general manager of Thai Tuan textiles, is too young to remember the war, and his principal experience with America was a positive one: a one-month study tour.

"At university we learned history, so we know it well, but for the younger generations we think that Vietnam and the United States need to cooperate," he said. "We don’t like war, and we want to live in peace."

Textiles are one of Vietnam’s biggest exports, but it is under direct threat from the Chinese juggernaut. Because Vietnam is not yet in the WTO, its exports to the U.S. are limited by quotas, while China is free to devour as much market share as it can.

Ngyuen Van Binh, a Trade Ministry official, said Vietnam’s textile exports could double if the quotas were lifted. He acknowledged that Vietnam has been slow to follow China in opening up to the world but that the country is finished hibernating.

"We cannot go back – never," Nguyen said. "If we go back, it means we are poor again, with nothing to eat."

He continued: "We don’t want to buy bicycles anymore. Not even motorbikes. We want to have cars."

This fear of China is also helping draw Vietnam closer to the United States.

Having taken years to re-establish ties, it was not until 2000 that then-President Bill Clinton became the first American leader to visit a unified Vietnam. But since then, Vietnam has intensified efforts to develop a relationship with the United States and make a name for itself on the international scene.

U.S. Navy vessels began making visits to Vietnam in 2003, resulting in the once-unthinkable sight of seeing American sailors in dress whites again on the streets of the old Saigon. Vietnam’s Defense Minister Pham Van Tra has visited the United States, and Prime Minister Phan Van Khai is expected to make his first trip to Washington this year.

"The U.S. and Vietnam have no strategic disagreements. In fact I think there’s a certain amount of strategic convergence," Burghardt said.

Across Vietnam, the fast pace of economic development, and of life in general, is palpable. It can also be dangerous. Hanoi and Ho Chi Minh City are awash in motorbikes, like krill on the tide, which makes crossing the cacophonous streets an exercise in bravery.

But car traffic is still light. This suggests that Vietnam is still at the beginning of its development.

Another clue is the lower penetration of cellular phone ownership, adding to the impression that Vietnam is probably a decade behind China in its climb.

What you see in Vietnam today are the first stirrings of a middle class. The government doesn’t refer to it as middle class, lest it offend communist sensibility, just as it shuns the term "privatization," preferring "equitization."

But it all adds up to the same thing: more people earning more, buying more – televisions, refrigerators, air conditioners – and striving for a better life.

It’s a crucial trend, because once a middle class takes hold, "development is self-perpetual," said Rohland of the World Bank. A more affluent society also values education and will be more likely to pressure Vietnam’s government to grant more freedoms. The trend throughout Asia has been that political liberalization follows economic liberalization.

At this point, only about 30 percent of the population has achieved or is close to achieving middle-income status, said Do Duc Dinh of the Center for Economic and Social Research in Hanoi. He thinks the figure could rise to 35 percent or more in five years.