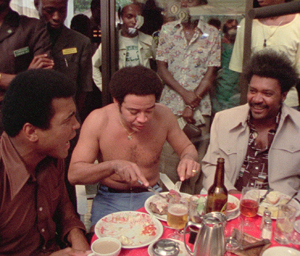 Soul Power isn’t a documentary so much as it is a document. Director Jeffrey Levy-Hinte was originally hired as an editor on Leon Gast’ brilliant, Academy Award-winning film When We Were Kings, the story surrounding “The Rumble in the Jungle,” Muhammad Ali and George Foreman’s legendary boxing battle in 1974.

The movie was culled from over 125 hours of footage and, when the assembly was over, Levy-Hinte couldn’t live with the knowledge that the remaining film was destined to lay dormant in a vault for the rest of time. Instead, he decided to play knight in shining armor, rescue it and create a second film, one he initially conceived as multiple concert films, centered on the music festival, titled simply Zaire 74, which coincided with the fight.

The three-day event saw performances from musical legends like B.B. King, James Brown, Celia Cruz and Bill Withers, all in peak form. It’s a crying shame this film doesn’t match that greatness. Levy-Hinte was so blinded by his quest, he forgot to realize that outtake footage is what DVD special features are for, not to duct-tape together a second sloppy incarnation of a film that was done deftly the first time.

Levy-Hinte’s stitched together effort has neither soul nor power. Without a narrative, voiceover, through-line, trajectory or even introductory titles, the film meanders along, blithely (and incorrectly) assuming the audience is enjoying the ride but never enticing or educating us along the way. Unless you’re a massive music fan, Soul Power is frustratingly nondescript.

Five-minute scenes feature performers literally pouring out sweat and tears, but without a title card, you’re left with no idea who they are. Certain luminaries require no introduction; James Brown, for example, in his bellbottomed jumpsuit festooned with a bedazzled “GFOS” (Godfather of Soul, duh) title belt, is instantly recognizable, but half a dozen other performers come and go, leaving the audience un-introduced, un-invested and annoyed.

Levy-Hinte admits he’s been told that this “isn’t even a documentary” but rather than re-crafting his film, he says he “reshaped it into a tighter narrative.” If that’s true, I shudder to think what earlier cuts of the film were like.

Besides editing When We Were Kings, Levy-Hinte previously worked as a producer on films like Thirteen and Laurel Canyon, all great independent features. The director’s chair, however, is not for him. Soul Power vacillates between tedious and mind numbingly boring.

How could a film featuring Muhammad Ali lack punch?

Movie Reviews
With a return to Westerns, ‘Cry Macho’ is a sunset rodeo for Clint Eastwood at 91
66 views