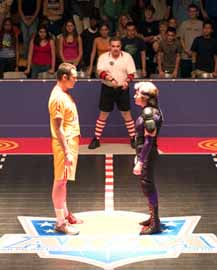 What do you get when you combine Ben Stiller’s over-the-top onscreen antics with Vince Vaughn’s sincere smile, throw in some skin-tight uniforms and a grade-school playground game loved by all? You get Dodgeball: A True Underdog Story, a comedy from writer/director Rawson Marshall Thurber (who created the famous "Terry Tate: Office Linebacker" commercial for Reebok), which, much to its benefit, is in the same vein as films like the Farrelly Brothers’ raunchy There’s Something About Mary and their offbeat bowling comedy, Kingpin.

Chock full of on-sight gags and slapstick comedy, Dodgeball – which also stars Christine Taylor (Stiller’s real-life wife), Rip Torn and Stephen Root – follows a group of misfits who, after finding out that their beloved local gym, Average Joe’s, is going to be taken over by a corporate health and fitness chain, enter a Dodgeball tournament in Las Vegas with the hopes of saving the gym.

The film will be screened at the ArcLight Theatre in Hollywood on Tuesday, May 17 at 7:30 p.m. It will be followed by a special Q&A with Thurber, the film’s writer/director.

Tickets are $11 per person and can be purchased at the box office or via the Internet at www.ArclightCinemas.com.

ArcLight Cinemas is located at 6360 W Sunset Blvd. (between Vine and Ivar, with DeLongpre to the south) in Hollywood.