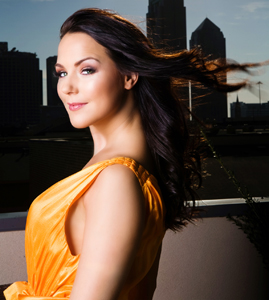 Julia Anderson: a “True Beauty” on the inside and out.
(Credit: John Livas)

If you’ve been out of the reality television loop the last few months, ABC televised a social experiment that sought to find a person who is beautiful on the inside and out. Produced by hotshots Ashton Kutcher and Tyra Banks, “True Beauty” ran for eight weeks earlier this year and crowned raven-haired Julia Anderson as a “true beauty.”

But if you think it’s easy to keep your cool under the hot lights of reality TV, think again.

“It’s not for the light of heart,” admits the beauty queen and winner of the network show. “You’re away from your friends and family for a long period of time. You’re put in some crazy situations. It’s definitely an experience.”

The Texas native was the only contestant on the program to pass all of the character issues for the win. And speaking with her for just a few minutes reveals why the pageant princess from Fort Worth deserves the title: She’s a genuine Southern belle who has recently moved to Los Angeles – the place where dreams (hopefully) come true – to pursue a lifelong goal she’s had since she was 11 years old when she first volunteered for the Special Olympics.

“My dream is to open up a dance studio,” says Anderson, “where kids with disabilities can let loose and feel what it’s like to dance because dance is my passion. I can’t imagine living without dance. Offering it to them would be a really cool experience.”

Though it was her kind heart that won over America, Anderson refuses to leave audiences just yet. She is a correspondent for “The Tyra Banks Show,” a stepping stone to a career that Anderson hopes will include many similar gigs in the entertainment industry.

“I love it because you get to be yourself,” she reveals. “You get paid to talk! As long as I get to do what I love and pay the bills, then I’ll be happy.”