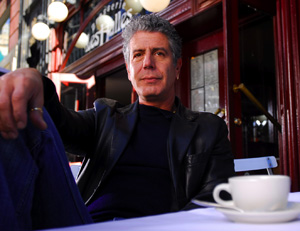 Anthony Bourdain delves into new food territory in “No Reservations.”

In an age where celebrity chefs like Bobby Flay and Paula Deen have charmed their ways into the hearts America, and culinary wizards such as Mario Batali pal around with Gwyneth Paltrow (the pair filmed a culinary tour of Spain for PBS: “Spain… On the Road Again”), Anthony Bourdain blazes his own trail.

During a two-hour speaking panel in Seattle last month, Bourdain commented on fellow-panelist Batali’s series with Paltrow by saying, “Why would you go to Spain with the one bitch who refuses to eat ham?” in reference to the actress’ well-publicized macrobiotic personal dietary habits. The acid-tongued chef, best-selling author and proud New Yorker sometimes displays a grumpy attitude that makes Larry David look like a happy camper and may seem like an unlikely TV host, but he’s been a fixture in the television world for foodies since 2002.

That year “A Cook’s Tour” premiered on the Food Network and showcased Bourdain traveling around the world sampling fare like a whole cobra – beating heart and all – in Vietnam. In 2005, Fox debuted a sitcom, “Kitchen Confidential,” based on Bourdain’s memoir of the same name. He has also appeared as a guest judge on “Top Chef” five times.

But the program that has really allowed the gourmand to shine launched in 2005 on the Travel Channel. “No Reservations” is different from other travel/food shows because of Bourdain’s fiery personality and the way he thoroughly immerses himself in the cuisine of the local culture. From fermenting kimchi in underground barrels in Korea to dining on unwashed warthog rectum in Namibia, Bourdain is always up for a challenge.

However, “No Reservations” isn’t just about eating unusual food, it’s about the connection between our lives and food and to each other. Although he’s just given up chain smoking, Bourdain will always be the culinary rebel with a cause.

The sixth season of “Anthony Bourdain: No Reservations” premieres July 13 at 10 p.m. on the Travel Channel.