Bullet for My Valentine: Lethal Weapons 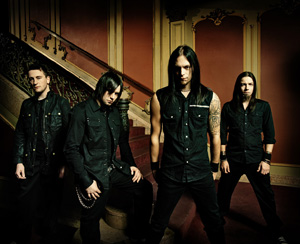 “It might not be a metal record for the next one,” muses Bullet for my Valentine drummer Michael “Moose” Thomas on his band’s forthcoming album, teasingly adding, “It might be a crossover album, or it might be even heavier, we don’t know yet.”

Asked what the odds are that his band will turn out a collection of sugary mainstream pop jams, he quickly quips, “I wouldn’t go too far.”

Though the currently in production album likely won’t be that drastic of a stylistic shift for Welsh natives, Thomas, along with bassist Jason James, guitarist Michael Paget and vocalist Matt Tuck, are ready to challenge their listeners’ aural senses.

‘“We just want to write better songs, to prove to people that we can,” says Thomas.

More than that, Thomas and his band mates are ready to start reaping the benefits of years of paid dues.

“When I was just getting into music as a teenager, I was into pop, then I discovered Nirvana and the next day I went out and bought Metallica,” says Thomas, adding with a laugh, “I wanted to play guitar, but that didn’t work out too well.”

Echoing these sentiments, Tuck found his inspiration sparked by the same band growing up: “I saw a Metallica video, and from that moment on, that was all I wanted to do.”

Between nonstop touring of both the United Kingdom and United States, Bullet for My Valentine have built quite a name for themselves.

“The other day, some guy recognized me, and I never get recognized, so that’s just weird,” says Thomas, though he jokes, “Matt gets recognized everywhere.”

“It’s not something we’ve really thought about until recently,” says Tuck. “We were so busy on The Poison, and we went straight into [Scream Aim Fire] and straight out on tour with it. There wasn’t time to reflect on what was happening. We were just out playing shows while things were getting bigger and bigger, and before we knew it, we were playing decent venues and headlining.”

Though their status may have come as a surprise to the band, in retrospect they’re more aware of how it happened.

“We come from a little town,” says Thomas, “but we’re proof that it can happen if you’re persistent and you work hard enough.”