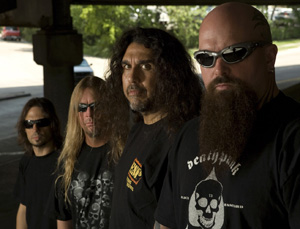 Summer means lots of music festivals, but one truly stands out: Mayhem Festival. Marilyn Manson and Slayer lead this season’s onslaught of metal. Two years ago these bands did their own tour, bringing together contrasting crowds.

“Slayer fans are not Manson fans. They are very different,” laughs Slayer drummer Dave Lombardo. “But I’m happy to go, we took him out last time, and now it’s our turn to go with him.”

Matching the ferocity of these two big names in music, the Mayhem lineup also includes Killswitch Engage, Job for a Cowboy, Bullet for My Valentine, Trivium, God Forbid, All That Remains, the Black Dahlia Murder, Mushroomhead and death metal pioneers, Cannibal Corpse.

Slayer is touring in support of their upcoming CD, World Painted Blood, coming out in the fall. The album marks their 30th anniversary. Originating in punk, the quartet took things a step further by tuning down their guitars and allowing Tom Araya to bring his inner demon out vocally and sing about topics that no one dared to before.

Lombardo says, “The songs on our latest album reflect what’s going on in the world. We have a track called ‘Americon’ about the conning of the American people and the government. The music brings out that aggression.”

With World Painted Blood, it’s apparent that the group is not getting soft in its later years.

“We delivered something special with this album, each song has a soul, and working with producer Greg Fiddleman, it really came through,” says Lombardo.

Slayer are known for fast songs, and what brings sold-out crowds to all of their shows is that they sound exactly the same live as they do on CD.

Lombardo states, “We are 40 to 45 year olds and play the toughest music, and the younger bands can’t keep up. They record these albums with tons of production and effects, and when it’s time to play live they can’t do it.”

Those who know Slayer’s music understand it’s all passion. With over 10 hit albums and live recordings this legendary group is proving that they’re all about writing good songs and performing them flawlessly live.

Lombardo concludes, “This band has grown over the years, and this album will separate the men from the boys. It’s not watered down or pre-produced. This is music in its most raw form. This is Slayer.”