Fourth of July Event Guide: Spark Up Some Fun! 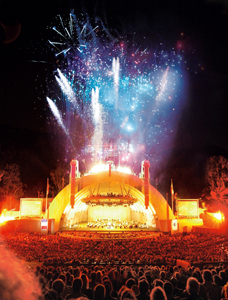 To celebrate the 40th anniversary of Woodstock, the Kings of Classic Rock will be playing all your favorite hits from the festival. There will be food available, or you can bring a picnic basket so you can eat while watching the strolling musicians. For the first time, you can see the fireworks from the roof for an additional $20. 6 p.m.-9 p.m. $20, $15 advance.

If you want some irreverence for your Independence Day, see which woman will be crowned this year’s margarita wrestling champion. All proceeds go towards the fight against breast cancer. It’s a non-stop party in Hermosa and Manhattan Beach all night. 1 p.m.-7 p.m. $25, includes cocktails.

Enjoy the aquarium at night and get a “fish-eye” view of the Queen Mary fireworks. You can also opt for a combo ticket, which includes a barbecue buffet offering chicken, hamburgers, hot dogs, baked beans, potato salad, corn bread and more. The aquarium is open from 9 a.m. to 10 p.m. The barbecue is from 6 p.m. to 8 p.m.

Sure, you can fight the masses on the beaches or you take an idyllic Independence Day cruise aboard a Hornblower yacht. There are three cruises (departing from Marina del Rey and/or Newport Beach) to choose from at three different times and prices.

The Futbol All-Stars Match will be an annual soccer event featuring stars of member countries of Confederation Sudamericana de Futbol against star players comprising a “Rest of the World” all-star team. 5 p.m., followed by a full hour of fireworks. Tickets start at $25.

A traditional fireworks extravaganza over the main channel programmed to patriotic music broadcast over FM radio KXLU, 88.9 and relayed over loudspeakers. 9 p.m. FREE.

Hear your favorite American classics courtesy of the L.A. Philharmonic as well as some classic rock by John Fogerty of Creedence Clearwater Revival with, of course, a fireworks display. 7:30 p.m. Tix start at $12.

Muscle Beach celebrates its 75th anniversary to see who’s the most sculpted of them all. 9 a.m.-5 p.m. FREE.

The reigning Miss America, Katie Stam, is this year’s grand marshal of the parade that runs down Sunset Boulevard at 2 p.m. The festivities also include a 5K/10K at 8:15 a.m., live music at 7 p.m. and fireworks at 9 p.m. FREE.

Enjoy the hottest jazz and blues along with arts and crafts, face painting and lots of food, including free watermelon. 1 p.m.-7 p.m. FREE

To commemorate the 50th anniversary of the loss of Ritchie Valens, Buddy Holly and the Big Bopper, the best tribute bands in the business will honor these early rock heroes. There will also be food, games, rides, prizes, other entertainment and, of course, fireworks! 10:30 a.m.-9:30 p.m. FREE.

The biggest fireworks show in SoCal will be accompanied by performances from five of the nation’s best Drum Corps units, military flyovers, demonstrations and tributes, a food court and more. Food court opens at 11 a.m. Stadium opens at 6 p.m. $13.