College With All The Trimmings: Schools Lure Students with High-tech, Convenient Perks 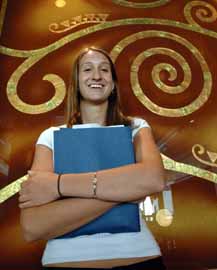 And at DePaul University in Chicago, where each dormitory room has free cable-TV service, students can log on to their personal computers to locate an empty computer terminal in the library or campus labs. The new program, based on an online airline-seating system, helps students decide when to leave their dorms, if at all.

"I don’t have to leave my room anymore," said Emily McDermott, a freshman who said her room is usually littered with pizza boxes. "I can get everything in my room on the Internet. I don’t have to go to the library, I can have food delivered, I can talk to people online."

Across the country, high school seniors are receiving college acceptance letters this month, and amenities are becoming a factor in their decisions.

Sasha Robey, a senior at Evanston Township High School in Illinois, had until May 1 to decide among four colleges, and she weighed the amenities along with the costs.

"At the beginning of the year, I heard Iowa had bigger dorm rooms than Indiana, and I was thinking of going there," Robey said. "But then I heard Indiana had a much nicer campus."

"The little amenities add up," Robey said, and many of her friends are also trying to process all the pros and cons as the deadline looms. "I’m not sure," she said. "A pool would help, it would be nice."

The Princeton Review, the company that produces popular college guide books, takes amenities into account when ranking schools on such things as cafeteria food and "happy students."

"College campuses are starting to resemble country clubs," said Princeton Review spokeswoman Robin Raskin. "Students like their spas and their Starbucks ... and schools are giving it to them.

"There is a growing trend that colleges are more concerned with the trimmings. In a market-driven culture, schools are falling back to the oldest trick. They are giving out gimmicks."

Alison Glenn, a senior at Evanston Township High School, said she checked out the pool and athletic facilities before deciding on Gustavus Adolphus College in Minnesota.

"It’s not my first priority, but amenities are important," she said. "It is a factor. Students look at these things."

David Kalsbeek, vice president for enrollment at DePaul, said a new college culture is beginning in which students expect and demand a level of service.

"The general public is increasingly inclined to see tuition as an investment," he said. "What institutions are drawn to do is guided by student expectations."

As in the business world, where branding and company recognition are paramount, schools have adopted a business mentality and are striving to differentiate themselves.

"The puzzling thing is that as these kinds of (amenities) are increasing in their frequency on the national level, we all have mounting concerns about the affordability of higher education," Kalsbeek said.

"This will end when the public balks at the price of institutions. It will reach a threshold where parents and students will be unwilling to pay the tuition."

But students are paying, and schools are finding a number of ways to build new recreation centers and increase comforts. Some schools rely on hefty endowments, alumni donations or student fees. Others, especially state schools, search for grants or state funds.

These amenities, many of which are housed in new multimillion-dollar buildings, help attract out-of-state students, who traditionally pay higher tuition rates.

The new additions have a minimal impact on student tuition rates and can help raise revenue, said Tony Pals, a spokesman for the National Association of Independent Colleges and Universities.

"Depending on the service, institutions go into (a new building) looking like it will generate more revenue for the institution," he said.

The buildings often house businesses, such as salons, fast-food restaurants and bookstores, that pay top dollar to rent space, Pals said. Because these conveniences attract students and prompt them to spend money and stay on campus, more student money is put back into the school.

"In the long run, it will more than pay for itself," Pals said.

Ohio State University recently opened a $140 million 605,000-square-foot center with indoor batting cages, rope courses and an indoor turf field. The state allotted $36 million for the project, student and faculty fees accounted for $86 million, and the athletic department furnished $18 million, said Diane Jensen, spokeswoman for the school’s department of recreation. Students who are registered for four credits or more are required to pay $42 a year in rec center fees.

"It does increase the cost of what students pay for college," Jensen said. "Students are concerned about increases in tuition, but I think they’ll see there is some value in it."

The school started planning the project almost 10 years ago when prospective students were lured to other schools by such attractions. "Rec centers and amenities can influence a student’s choice," Jensen said.

This semester Boston University opened a $90 million fitness and recreation center with a lazy river, a hot tub for 25, a pool with a wave machine and a juice bar.

"I don’t know of any school that isn’t providing the elaborate," said Warin Dexter, director of physical education, recreation and dance at the university. "It’s a way to keep students happy while they are matriculating."

But David Rood, spokesman for the National Association of College Auxiliary Services, however, downplayed the impact an upscale campus has on student decisions.

"It will take a real idiot to spend $40,000 based on what the student union looks like," Rood said.

"The Taj Mahals are few and far between," he said. "It’s all about the comfort level and basic support services. If that comfort level isn’t there, it will certainly detract from a student’s opinion of a college."

Indulgences can also reach into residence halls. Inside traditional-looking college dorm rooms, free cable service is taken for granted. Students can order groceries, meet the attractive man or woman who sits in the front row of class, obtain course work and submit homework online – all without leaving their rooms.

Duke generated publicity last fall when it spent about $500,000 and doled out iPods – mp3 players that retail for $300 – to its incoming freshmen. In addition to storing up to 5,000 song files, the music players can be used for audio recording and to hold computer files. Next semester the school will distribute the devices to students in certain courses, at the request of faculty members.

Kelly Rohrs, a junior at Duke, said the iPods have a dual role: They attract and impress incoming freshmen and are an educational tool.

"A handful of professors have been using them in constructive ways," said Rohrs, managing editor of the school newspaper. "Administrators do believe they are educational ... but their primary use among freshmen is to listen to mp3s."