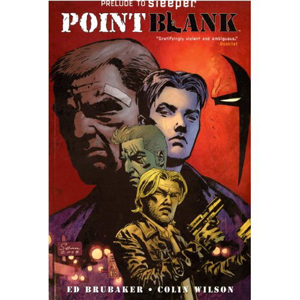 When Wildstorm approached Ed Brubaker to write a murder mystery set in the WildC.A.T.S. universe, the result was Point Blank, the prelude to what became Brubaker’s series Sleeper.

A look at Brubaker’s dedication to both Lee Marvin and Alan Moore gives you an idea of what to expect. It’s a slim, but complex, twisting story.

Cole is a former member of a now-defunct special-ops team of “post-humans.” When his former team leader is shot and winds up in a coma, Cole gets embroiled in a noirish web of intrigue and suspicion amongst a world of very dangerous people.

Brubaker is one of the sharpest writers in comics (check out Criminal, if you haven’t already). Colin Wilson provides the atmospheric urban milieu.