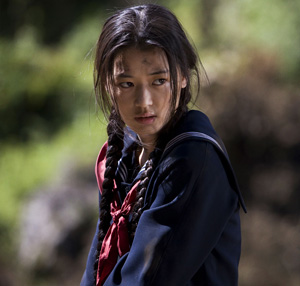 Blood: The Last Vampire is a live-action film based on a 2001 anime of the same name. The storyline involves a half-human, half-vampire samurai, Saya, who dispatches evil demonic vampires with her trusty samurai sword. This live-action effort falls spectacularly short of its anime counterpart.

Blood is full of ham-fisted dialogue and clumsy exposition. The performances are generally terrible, but what can you ask of an actor that’s been given a screenplay like this? Keep in mind that this criticism isn’t just reserved for the above-the-line talent, but belongs to everyone that appears on the screen. A shoddy screenplay, delivered with all the verve and excitement of drying paint.

It may come as a note of interest that Corey Yuen (excellent action choreographer, sometimes director) is responsible for the fights in Blood. Unfortunately, director Chris Nahon and editor Marco Cave butcher whatever finesse Yuen may have interjected. Their one-two punch of sloppy direction and chaotic editing do nothing but sully the good work of Yuen.

Likewise, the special effects are distinctly amateurish, bordering laughable. CGI blood, the most innocuous of gore, permeates every fight scene. There is nothing so deflating to a sense of suspense than when everyone starts bleeding cartoon blood. Also, there are CGI monsters in this film that are so poorly rendered that it isn’t impossible to think that you may laugh at the sight of them. Or cringe.

And if my short synopsis seems reminiscent of the Blade films, then just wait until you see the chase scene involving a dilapidated truck and a winged beast, which is so obviously inspired by a similar chase in Underworld: Evolution that you may be inclined to call it a rip-off.

To reiterate: Blood: The Last Vampire is based on a cartoon that had a running time just shy of 50 minutes and was heralded (at the time) for its virtuoso style and flashy animation. This adaptation has neither of those attributions.